Oh, for the Sake of the Fruit - The Life of Durians Lovers Living with Durian Haters 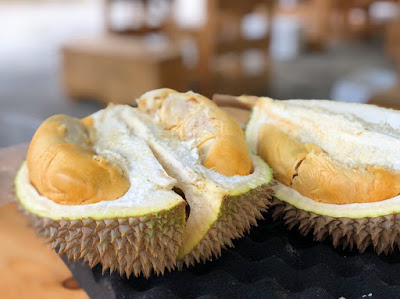 You either love durians with passion or you hate it with just as much concupiscence. Durian lovers will always congregate to feast on this infamous King of Fruits because it is hard to find fellow Durian lovers even in a SouthEast Asian country like Malaysia.

Just this past weekend, my brother's colleague brought home some really top-grade Durian from Raub and he kept it aside for us and away from his family members. Not because he doesn't love his family but because they can't stand the stench of Durian. #lol. So, he was the lone ranger in his family as I am in mine.

So, when he got his hands on those top-quality durians, he had to keep it tightly lidded and hidden away from the common areas of his own home lest it insidiously offends the durian haters.
When my mom and I went over to his house, he quickly ushered us to the back of his kitchen. There, the three of us feasted quickly on the divine fruit as surreptitiously as possible. Like thieves. 😂 But good Lord, it was so to-die-for!


Back in Penang, we had no problems going Bacchanalian in the kitchen or living room because durian lovers often outnumber the haters there. Our Penang brethren are durian lovers of the highest accord and know how to hunt down the best durian sellers on the island. And they would feast on it as everyone loved it. Almost.

I've tried buying durians back into my home before but the smell just turned everyone else off so much so that they would either gag, fake vomit or complain outright. Durian lovers living among durian haters would have to forever live with the offended, accusing glares of durian haters in their homes, for polluting the air. So, we do it in private, in hiding. #lol


I would like to make a case for the deliciousness of durians but can't deny the uniqueness of the smell, hard as I try. I've tried to persuade my kids to at least not hate it with so much intensity but I know they are merely tolerating it because...well, I'm mom, for one.

I live in an area of Selangor where there is a whole neighborhood, or a town square, where durians are aplenty. It's a durian lover's Paradise. The price of durian fruit would drop or rise according to the season but not the number of durian lovers stomping through its gates. All year round, durian lovers patronize the stalls to get their fill of the fruit unapologetically.

Suffice to say, I don't get to stop by the stalls very often even when I drive past them, only getting to whiff at the sweet aroma in passing.


I don't understand what's to hate about durians, I complained to my mom, jokingly, in the car as I took her home. This was because TeaLive, a top Malaysian bubble tea franchise, is currently offering a durian-flavored bubble tea drink and I tried it the other day. Although it's nothing like mushily sinking my fingers and teeth into a real durian, it did the trick. Even in the tightly vacuum-wrapped plastic containers that the drink came in, the smell still seeped out. It was the closest I could get to a real durian and I settled.

It's just the way durian is, the aroma is just fast and loose, floating through the molecules of air trying to either entice or offend everyone around it.

And the smell hangs around long after the fruit is gone too, clinging onto everything from cushion covers, clothing to tabletops. It leaves behind damning evidence that we try to remove but can't quite.

Why can't it be just like an apple? 😂😁😀😇😅 You don't see bananas causing the same ruckus, you know what I mean?

That's the life of a durian lover living among durian haters. A sad life of eating in hiding, afraid of offending non-lovers, and begging for a quick fix once in a while.