January 23, 2018
I felt a little sick translating this but Syed Azmi has a huge following on his Facebook page because of his many humanitarian efforts. It spans states, countries, races, religions and backgrounds. As he sometimes does, he updates the rest of his followers about what he has been up to.
This was written in half English and half Bahasa as some bilingual Malaysians would often do but I feel that the world needs to read this too. The fear and the shame is just the same, no matter the language, no matter the country.
I've been asked by some people why people keep silent when they are raped or sexually violated and I would give them a smile (a smirk, you might even say) and ask 'Is it anything we can be proud of?', 'How many people do you think will believe us?', 'What on earth are people going to think of me then?', 'What's the use? and 'Who's the winner in the end, is there one, is it me?'
If those are questions a grown person would ask, imagine the scary ones a child would. It might, however, look something a little like this. 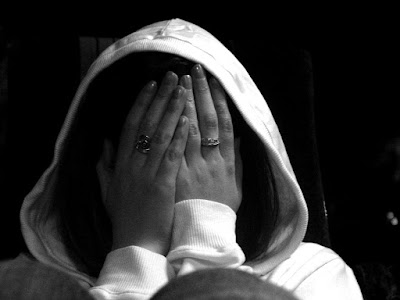 Image Credit : Shame on Freeimages.com
*** *** ***
"Ayah pass phone dia pada adik. Adik amik handphone and main handphone.
Belakang adik, ayah mencabul dan rogol saya."
(Dad passed his phone to little sister. She takes and plays with the phone. Behind her, dad sexually violates and rapes her)
Although this may sound absurd, tapi kalau dah macam ni (if it has been like this) for the past 5 years and dah cakap dengan mak, mak tak endah (have spoken to mom but mom doesn't do anything), cakap dengan cikgu, cikgu takut nak masuk campur (have spoken to the teacher but the teacher's afraid to meddle in family affairs)- Last-last, main depan adik beradik 4 orang pun dah takde perasaan dah (performs such vile acts in front the siblings and they don't even see it as anything out of the norm anymore). But it hurt this child, silap (wrong) - all children.
In the end, waktu masuk sekolah menengah baru-baru ni (when she entered secondary school lately), this girl try to tell the teacher, the teacher called me and after an hour drive, i reached the school and see her.
All sort of sex act, you name it.
I gave her 2 pregnancy test to check. Comes back negative.
And this is how we start.
I introduced myself.
I explained that we are all here to protect you.
Tanya nama, tanya nama panggilan apa. (I asked for her name)
The teacher already explained to me earlier what happened and they wanted to know what to do next.
Standard, call 15999
Report police
Medical check up
Tapi anak ni tak takut semua tu.(but the child is not afraid of all of that)
All dia nak tahu (all she wants to know is), apa jadi nanti kat mak dan adik beradik. (What will happen to mom and all her other siblings)
Dia tetap sayang ayah. Dia cuma nak ayah berhenti buat jahat padanya.(She still loves her dad. She just wants him to stop the acts)
I actually said, today, i try my best to do what you want.
Nak report police? Tak tahu. (Do you want to report this to the police? Don't know)
Habis dik, nanti siapa nak bagitahu ayah supaya jangan buat lagi? Tak tahu. (Who, then, is going to tell dad to stop whatever he's doing? Don't know)
Lagi lama kita tunggu, ayah akan terus buat. (The longer you wait, the longer he will continue doing it)
She finally said, kakak pun kena juga. Kalau kakak report, saya report. (My big sister's received the same treatment. If she reports the rape, I will do it too)
The sister is in KL and she is in Selangor.
She called the sister.
The sister thinks like her.
Nanti apa kata keluarga. (What will, then, the family say)
Nanti apa kata jiran. (What will the neighbors say)
Nanti ayah kena buang kerja. (What if dad loses his job?)
Saya nak sambung belajar, kalau ayah tak kerja sapa nanti nak tanggung belajar. (I want to continue studying. If dad is out of a job, who's going to pay for the studies?)
Takpelah, biarkan aje. Mak kata bagi peluang. (It's alright. Let it go. Mom says to give him a chance)
I explained again.
Kakak kata, nak fikirkan dulu. Malam ni bagitau. (Big sister says to think about it again. We'll make a decision tonight and let you know)
Ok.
Talked to the girl kat depan ni.(In front of this place)
She is now talking abit. Better than earlier. Rasa lega (Relieved) She said.
I explained lagi, ni sementara sahaja (It's temporary). Nanti balik cuti semester lain pulak.(When you're back during semester break, things will be different [?])
We drove back, waiting for the decision.
I called JKMWPKL, pasukan beruniform (uniformed personnnel) dan prepared the teacher.
And waited.
Baru sekejap tadi, the kakak confirm. (Just a moment ago, the big sister confirmed)
"Buatlah report, tapi biar hujung minggu waktu ayah tak kerja." (Let's make the report, but let's do it at the end of the week when dad isn't working)
And as someone who respect the need and consent of a child, wish i could do better.
Everyone is in place. Now we let the system run.
Tapi yang saya paling sedih (What I am saddest about), among siblings, dah boleh share" Kau kena tak semalam?" sesama sendiri sebab dah biasa kena (they share privately amongst each other, 'Did you get it? because it has become a common occurrence and knowledge). More then 5 years.
If you ask me, the family dynamics plays an important role why children fikir tak nak repot. (why the children are reluctant to report such actions)
Ayah seorang sahaja yang kerja. (Dad is the sole breadwinner of the family)
Mak suri rumah. (Mom is a homemaker)
Tiada datuk nenek saudara dan ada konflik keluarga. (No grandparents, relatives around and there's family conflict)
Jadi kalau ayah masuk jail, siapa yang susah. Mereka yang susah. (In the event the father goes to jail, who suffers the fate? They will ALL suffer the fate)
Jadi penyelesaian yang itu perlu. (So, the solution to this predicament [?])
Imagine how to answer that infront of the child?
Mana sempat nak maki-maki. Saya senyum sahaja. (There's no time to judge. I can only smile)
Dan explain our system macam mana. (explain to them how our system works)
*I may have foster care to be in place.
Apa masyarakat boleh buat? (What can the society do?)
Kenal balai polis yang berdekatan. (Get to know the local, nearest police station)
Dapatkan number telefon polis. (Get and note their telephone numbers)
Ingat 15999. Ajar pada semua anak-anak. (Remember the number 15999. Drill the number into all your children)
JANGAN TAKUT NAK BUAT REPORT. (Don't be afraid to make a report)
JANGAN TAKUT NAK BUAT REPORT. (Don't be afraid to make a report)
JANGAN TAKUT NAK BUAT REPORT. (Don't be afraid to make a report)
(especially cikgu, kaunselor, jiran)  (especially if you're a teacher, counselor or neighbor)