Every Move You Make (TVB) 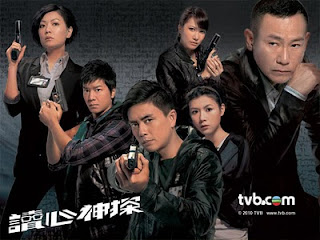 This is most definitely a series that I will watch again! The stories are interesting, especially the last one involving a man suffering from Schizophrenia.

In short, this series is about a team of cops who is led by an expert in body language, Bowie. Bowie was quite perfectly chosen for this role - maybe it was written for him, too. Who knows? :-) He has a good partner in the form of a lady cop played by Crystal Tin. There are quite a few new faces in this series. The tall, thin girl who looks like a model....I have no idea who she is. My radar missed her from all the series that I have been watching so far.

Really love Bosco in this series!! He plays the renegade cop who is skeptical about reading body language. But he fell in love with Bowie's sister, Aimee Chan, so began his journey in trying to polish his boss' shoes, hence, learning to like the way his boss works more.

The eye opener for me is seeing Susan Tse in a non-baddie role. When I saw that she was playing a nice-person role, I realized my antenna went up but she is a fantastic actress - fantastic and flawless as a good person as well.

What I also like is the chemistry between all the cast members - they looked very comfortable working with each other. With the exception of Chris Lai and the newbie actress. She is new, so, let's cut her some slack.

Apart from the nicely written script, I also applaud the writers for spending almost an entire episode ironing out all love triangles and had more fun-filled, cute, comedic and romantic scenes into the storyline. Most crime series from TVB has the show on high alert till the very last few minutes whereby everything else is hurried or left out.