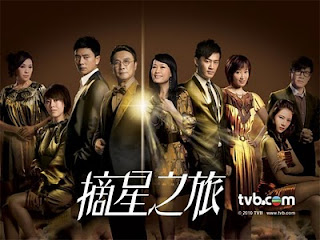 The essence of the story is there - family ties, importance of being accommodating with friends, being kind, not being greedy...that is the true essence of the story, which is good, but the writers of the script should be shot for spoiling quite a compelling story with over-the-top dramatics and unbelievable plot.

To say that I don't get with China's way of filming the series with a thousand angles to one scene and pauses so long you can hear the crickets breeding in the background - that is just pure insanity. I did not pay for the DVDs to hear crickets make love in the background. I just want to watch the show, alright?

Damian Lau...well, I have never been much of a fan, really but he was OK. Cecelia Yip was completely OUT OF THIS WORLD ORGASMIC!! There was a part of the series when she went a little cuckoo up there in her head and her screaming really made me wonder if she wasn't already insane just from acting that one scene out.

Toby Leung is non-existent to me. Bad acting, too plain looking for an important role. I don't like to be insulting and mean but seriously...enough said.

His chemistry with Zhao Ziqi is as wooden as the spoon in my cup submerged in chamomile tea in front of my right now. Rigid, and completely unbelievable. Zhao Ziqi's character is also annoying to bits. I think she was supposed to make the character very lovable and caring - nope. Didn't work. I kept feeling like she was the pest that Raymond's character kept saying she was.


Bosco...hhmm...well, this is the first time he is undertaking a villain role, so, it wasn't too bad. For a mean and greedy person, too many times he looked too gentle and caring...except towards the end when he exchanged mean words with Raymond and Toby. That was badass!

I know it is a drama but hell...could there be too much drama in a drama to a point that it appears to be an alien movie? Maybe I have not been watching too many Chinese or Taiwanese series these days. TVB is milder (modern series) compared to those.

If you could bear with the stupidity of the script in the beginning of the series and wait for last 8 episodes or something, THEN and only then there is something drama-like emotion. The fatherly love between Damian and Raymond Lam finally shines through and we get some really intense and moving script between the two.

Anyway, thinking of getting the DVD? Hang on and think about it, read reviews about it and ask your friends. Better yet, borrow from your friends first instead of buying it straight. It might not be worth your money. I am thinking of selling it already if not for the fact that I like to keep a collection of all Raymond Lam series.