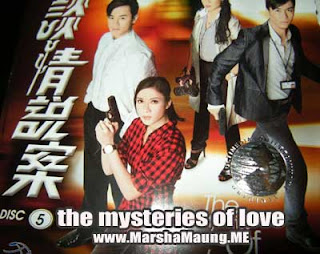 For Raymond Lam fans, this is a MUST WATCH. His character here reminds me a little about one of the first few series he starred in called 'Eternal Happiness'. In Eternal Happiness, he played this really slow person whom you would want to punch the daylights out of but he was so cute and innocent and naive that...well, you end up loving the hell outta the guy. In The Mysteries of Love, he has the same aloofness but is super smart but dumb in love. At one point in time, I truly hated Prof Kingsley for being a jerk, asshole. In the end, he sorta made up for it.

Story-wise, this is a good one combining two love stories and punctuated with lots of other crime-solving stories. They were all nicely interlaced. They spent enough time elaborating on each character and why they were the way they were and then worked it all together nicely.

Raymond Lam plays a super smart (young and handsome) professor who is a genius in physics. He is asked to solve many crime for Lo Sir played by Kenneth Ma. His view is that everything on earth can be explained via physics, including love. He worked out with maths that he ought to be in love with Tavia Yeung who played Sai Lei Mui.

Sai Lei Mui who is a heart-driven person, empathetic and motivated by her emotions had the misfortune of falling in love with a block of wood in the form of Raymond Lam. At first, she did not let herself believe that Prof Kings would be in love with her - she's thinking that it is almost like striking lottery to have someone so suave and extraordinary fall in love with someone so simple and ordinary like her.

Lo Sir (Kenneth Ma) is someone who loves women too much to commit to one. He spends his days working hard solving cases but spends his nights with different girls all the time except for one person with whom he believes to have the same stand as himself, Nikole, played by Bernice Liu. Lo Sir thinks that their relationship is the most perfect thing as committment is as far away a possibility to Nikole as it is to him. So, he worked it out to be the perfect solution. That is before Nikole entered a new phase in her life.

Nikole (Bernice Liu) is an independent woman who loves her work as a photographer, traveler and a journalist. She pursues life fervently and urgently and thinks that her relationship with Lo Sir can and should remain the way it is. Until one fine day, she discovered that she has suddenly fallen in love with Lo Sir. She knew that Lo Sir is not the kind to change his stand on commitment, hence, she went off and found someone she thought she loved and wanted to marry. And then Lo Sir couldn't understand his concern for her.


I don't know the name of the actor who played Sai Lei Sui's 2nd brother but as usual, he is effing hilarious! His comic timing is almost impeccable. He's always playing these loud, rude, obnoxious characters all the time and I wonder how he would pull through as a gentleman with good manners, lots of money and women chasing after him. Food for thought or imagination? :-)

Evergreen Mak is in his usual perfect element in this series but seriously, I don't like his character too much. Too lame. :-P

Verdict: Kenneth Ma and Bernice Liu had a record-breaking (by Asian standards, I think) screen time of bed and kissing scenes! This is like revolutionary. The only other record-breaking thing that I can remember of TVB is in 'Twin of Brothers' with the so-called butt-revealing scene (starring Raymond Lam and Ron Ng).

The Bernice and Kenneth storyline is worth telling because many modern people are like this. Everything is free flow but there will come a time when one party enters a new phase or falls in love with the other. They downplayed the emotions here, though, because I don't know why Bernice was so angry at Kenneth in the end just because of something he said when drinking with his buddies. *Shrug*. They wanted the give this love-line a little bit more to talk about, I guess since Kenneth's admitted that he wanted to marry Bernice and that she meant a lot to him.

The Raymond and Tavia storyline is really something. I mean, it's REALLY something.

Just when Tavia got used to the fact that Raymond is in love with her, he takes everything back and say that his 'calculations' were wrong. I mean like....WTF!!! She said so many times, "I never dreamed of having you before. But now that I have you, why do you have to take it all back!?"

The pain she felt drove her to depression and she entertained the thoughts of ending her life. But she managed to pick herself up again. Raymond then wanted to be 'friends' (BUGGER OFF, ASSHOLE!) but Tavia can't take the pain of even seeing him. Seeing him makes her want him back and she gets angry that way.

Then Raymond suddenly realized that he was in love with her all along and wanted her back and of course Tavia told him to go eff himself. Well, not really. :-) She was getting on fine with her new life without him and his consistent pressure to get back together made her miserable. She would never, never, NEVER want to let herself be hurt that way (by the same man) ever again. Which is understandable...and something we all can relate to in real life.

So, with all the spoilers out on this blog page, I think you get what I mean when I say that this is an awesome story. Go get the DVD. It's a keeper. Even if you are no fan of Raymond Lam (like me). Bernice is friggin' gorgeous in here, if I do say so myself.