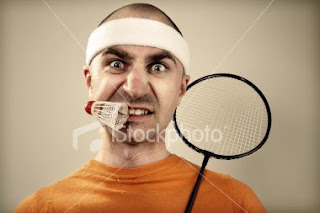 image of man biting badminton shuttle
when i was young, my whole family played badminton well. my dad was a good badminton player, and he saw the potential in my brother because he was tall, fast, agile and had the natural flair for it. ah well, it became a family sport and my sister and me...well, we got into the game too.

we wake up, go for jogs, go swimming regularly (hence, i developed VERY TANNED SKIN and large shoulders which made people call me a gorilla or an ah-kua when seen from the back - i kid you not), train in badminton very SERIOUSLY...like, serve shots a few hundred times into the same spot, shadow play and all that shit. but of course, after a while, we learn how to have a little bit of fun after the session.

i wanted to be a big badminton player too, actually. but gave up when something struck me.

in order to be competitive and come up on top, i need one thing that i didn't have back then. my dad did not have the word for it, neither did i.

when faced with the opponent, my thoughts were EVERYWHERE!! i blamed the shuttle, i hated the opponent, my racket was too heavy, my partner is stupid, the court is too warm, i didn't get enough sleep, i was thirsty....and hey, there's a cute guy!!! yoohoo...

with my brother and other good players, they only had one thing in mind. the next shot. and then the next...from moment to moment, they placed their complete focus on the mission, to come out on top, to make fewer mistakes, and when they make a mistake they learn not to fret or regret it and move on, they learn to be neutral and not get angry or panic, to find the right opportunity to strike and stretch the opponent.

it is only now when i am so much older, been through so much that i realize that the one thing that i don't have and have finally found is focus. one step to the next...make fewer mistakes (the drop shot is too short...HEEELLL), find the right time to strike (you DON'T smash smash smash smash smash smash smash all the time. doesn't work that way). and if you lose, you don't break the racquet because when you do, you don't change anything (and have to buy a new one).

one moment propels another and if you focus on it, you use it correctly, the next moment could be the winning drop shot.