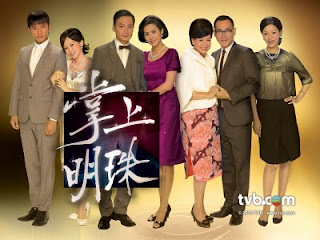 The unique thing about this storyline is that everyone, more or less, gets a chance to be bad and then good, bad and then good again. At the end of the day, you don't really know who is the real good and bad person.

I like Jessica Hsuen and think she's a fantastic actress but somehow, when you have veteran villains in there, she sorta falls short. Not by a lot, but still falling short. I mean, you have Bowie there who has been the meanest kind of baddie EVA and then there's Kiki Sheung in there. In the end, when you look at Jessica's villain parts, it's nothing to shout about.

The storyline is a little over-the-top as usual but it's pretty boring in the beginning when you get confused as to who is who, what is doing what, who's for real and what's really going on. The pace picks up towards the end, don't worry.

For ONCE, Savio Tsang is NOT the baddie!! Hahahaha!! He's the good guy ALL THE WAY to the end of the movie.

It's sad that they didn't make more of the third sister's relationship with that Sor Chai (silly boy) - I don't know their real names. The third sister seems to be one of those rising stars for TVB. Been seeing her as supporting cast already with her name tossed in together with big stars.

At first, Michael Tao was like the main bad meanie and since I don't want to give the ending away, I don't like Michael Tao and Jessica Hsuen's ending. But it was a nice twist, anyway.

All in all, it was pretty exciting towards the end although it would have been less tiring if they were not plotting so much against each other. There was, literally, no feel good moment in the series at all. Like, every moment is a tense, stressed-out one.

I like the scene where Joyce Tang Lai Ming had to give birth in the middle of nowhere. I think that scene with Joyce Tang, Jessica Hsuen, Bowie Lam and Michael Tao is the best scene....very intense! If I were Michael Tao, I wouldn't know how to choose either.