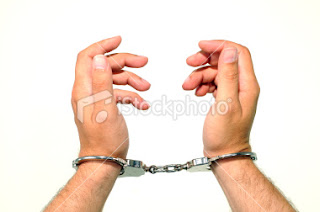 Handcuffed image
We didn't have a name for it back then but now we do.

Here's what happens. A bunch of robbers storm into a bank and hold the clerks captive. The captors refuse to negotiate with the cops, so, the captors and captives remain within the vicinity of the bank for a couple of days. The robbers were not completely bad because they shared their drinks, cigarettes, blankets, food and conversation might even get a little personal.

Captive: Why are you doing this?
Robber: My wife's pregnant and my kid's got cancer. What ELSE can I do?

At the end of fifth day, the cop-and-robber dance ends when the cops ambushes the robbers and saves the victims. The hostage situation comes to an end.

The funny thing is that the captives are never the same again. Yes, they go into shock of course but that is not what happens. The captives actually feel sorry for the robbers because they have formed an attachment to the robbers during the five days of being held captive.

They find themselves making excuses for the robbers and forgiving them with all their hearts. To a certain (weird) extent, they didn't REALLY hate the robbers or want the hostage situation to end the way it did.

This, my friends, is called the Stockholm Syndrome.

I am applying this to women in an abusive relationship. Because of that attachment, they remain within the marriage. They find excuses to remain. They sympathize, They feel that without that bond, they will not survive. That is what cripples a woman, ladies and gentlemen.

I know of so many women who never knew it was a psychological effect and chose to remain married KNOWING that it was abusive, accepting the fact that a wrong choice was made and they have to just 'live with it'. Getting out of it was out of the question, despite being a victim.

The first step is knowing. The second step is in acting.

If you know of someone suffering like this, please extend a hand and help them out of it. No one is worth being abused over.