One good friend is all you need

April 25, 2009
When I was younger, I had a huge bunch of friends. Everyone who wanted to be my friend became my friend. Life as a young teen was uncomplicated then and we all had our differences....but we remained friends. Then we grew up.
Over the many years, I grew from having many friends to no friends because I ostracized everyone after I got married and had kids. My kids took up every single waking moment of sanity from me - I don't regret it but this is what becomes of a woman when she becomes a mother. I refret that.
But thankfully, over these few years, I started having some friends again. Some good, some bad, some talked, some gossiped, some strange, some perfectly in tune with me.
I realize that a person does NOT need to have MANY MANY friends in order to be happy. One person needs only one or two good friends.
Hence, this little drawing. :-)
It feels good to have those one or two good friends who knows me, loves me, cares for me and believes in me. Those are the friends who would call you when you're sick, not only post messages on my facebook account but will SMS or call me to check on me. These are the ones who would buy something special for you (does not have to be something special....it could be a particularly delicious bunch of bananas for all I care) whenever they're out. It's because they're thinking of you even when they're not with you.
These are also friends with whom you would end up bring friends with again even after a huge tiff or even when you're standing on opposite sides of the fence. You may not agree with everything your good friend have said or have an opinion of, the most important thing is that you agree that you don't agree. And agree that you disagree. End of story.
To those friends....I drew this.
Eh, I am not Picasso lah but like I said in the past, I draw and scribble all the time and this is just one of those. 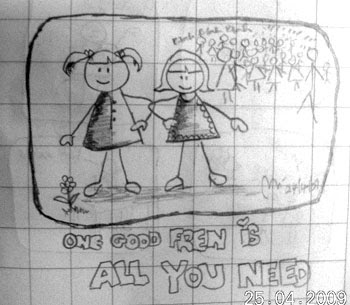 clair said…
I so agree with you, marsha. Really good friends are hard to come by and so very precious esp in a world where people can be so indifferent, so easily insulted and on different wavelengths.
April 25, 2009 at 10:29 AM

Marsha Maung said…
yeah, there are ppl who sometimes i feel that i am obliged to keep as a friend and end up, i make myself happy. but the truth of the matter, is only the few who counts matter. ppl who irk you and PRETEND to be your friend....can forget about them liao lor.....
April 25, 2009 at 11:13 AM

Another Mom said…
true that, true that. you've hit the nail on the head for MY perception of good friends as well. i'm at the 'new mom, my son is my world, is my life, takes all my time' stage of things.

i've already added you recently on twitter. will add u on fb (depending on how the internet connection is at the moment, fb is taking forever and a day to load). i'll direct message and indicate that i'm 'another mom'
April 27, 2009 at 11:24 AM