When Marsha is Pissed Off 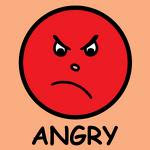 This cannot be a good thing. I have one admission to make. I make a bad pisser-offer. You know how people explode all the time when something irks them – and they’re like firing off rounds after rounds without a care in the world? In the evening, when the sun has gone down and the owls starts hooting, they just lie down, read a book and then, go to sleep.

When I was younger, I used to be impulsive and also have a motormouth, talk non-stop, fire non-stop and if you pissed me off then, you’ll get an earful there and then.

Nowadays, nobody gets a piece of my mind anymore because I have learned, unwittingly, how to bottle things up. I keep telling myself, “It’s OK lah, never mind lah, don’t be so siu-hei lah, don’t be so sensitive about things lah” but the feeling doesn’t go away. Ends up…it gets bottled up inside, piling one on top of another.

So, on the outside, people say, “Marsha, you’re such a nice person you know. You’ve got no temper whatsoever wan?”. *rolling eyes*. This goes for getting emotional too – which means I don’t cry at all…unless I am watching a soppy movie or series lah or you're amputating my leg without Anaesthetic. Otherwise, nothing much can hurt me to a point that I start bawling. Even when a friend walks out on me or betray me, not a single tear will fall from these eyes. Others will say, “You’re so strong” but to me, I am stupid.

Come to think of it, I do this even when I was young. I can tolerate a lot of things and will let people walk all over me time and time again. But when they cross the line, I give no warning. Yes. I know it sounds absolutely scary but it’s true. I will just up and go. I will cut all ties, remove all emotional links and feelings attached to that event or person and go on with life as if nothing happened.

When I reach that stage, there’s no turning back unless the other person turn around first. Yes, I am stubborn that way – you can say ‘sei oi meen’ (a little bit lah, I admit) but it’s more like an emotional protection against further harm. It's like I don't want to be hurt anymore, here's the barrier. You stay over there and hurt someone else, please. Since they’ve harmed me or hurt me before, if I turn around again, then I would be the SH who opened myself up for pain again. If they turn around first (most probably I will say OK, let's give it another shot) and they hurt me again, they initiated it, not me. And I walk away again.