Just One of ‘Em Guys 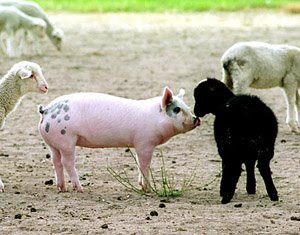 Have you ever been tempted to take a second look at a girl if she was surrounded by a group of guys? Do you look her up and down to see why she was so popular among the lads instead of the ladies? Do you mentally size her up to see what ‘extras’ she has to make her such a bloke-magnet?

Some girls just get along better with the guys…most of the time, it’s just the plain ole’ one-of-the-guys situation whereby the guys don’t even consider her a female at all. For some reason, maybe it’s the mental wave length or interest, I tend to click better with guys. Talking about sales, promotions, the latest fashion accessories, makeup brand or shortest skirt in the world just don’t kick it with me! I have no idea why.

Even today, the people I mingle around with or is close with are mostly guys. We have more things to talk about – like one of my friends say, “Maybe it’s because you like to talk cock and not bitch around, that’s why” and then another said, “Maybe you are supposed to be born a guy but someone up there made a mistake”. Oh shoot, if that’s the case.

Anyway, when a girl is surrounded by a bunch of guys, it’s not always because the girl is popular or the guys are all vying for her. Sometimes it’s just because she prefers to mingle with the men…innocently and platonically. It happens, guys! Although I have to admit that the plan went awry a few times but it happens. During school days, I had a bunch of girlfriends I hung around with, the four of us and we fought all the time. We fought about who’s whose best-bestfriend, whose house we’re having a party in, we also fought about who’s grades were better and also fought over the same geeky guy! Trust me, when you see the picture of the guy we were fighting over, you’d keel over with laughter! SERIOUSLY. He had glasses the size of a big Mexican hat, a belly that speaks of good food at home and such good grades that he was categorized as ‘untouchable because he’s a nerd’. But we fought over him simply because I thought he was kind of adorable. I tend to like geeky guys or quiet guys quite a fair bit, I have to admit. The loud ones just turn me off or turn into good friends, instead.

But with my guy friends, it’s a lot different. In fact, in college, I discovered that I liked hanging out with gays too although they talk about fashion and clothing and stuff but they don’t sock me when I tell them, “Oh, sod off, you sissified moron! Shut up already. I don’t wanna know about the sale, ok? So, who was dumped last week?” And somehow, they are such gossip-magnets! Tee hee hee….

I told you I was a bit of a tomboy. In fact, I find power rangers a whole lot cooler than Barbie if you ask me. But if Barbie came up with a sexy proposition for me, I’d shove her down the drainpipe. There’s no question about my sexual orientation (oh ddduuuuhhhhh!!!) but is it wrong for a girl to prefer hanging out with guys than girls?

Anonymous said…
Marsha, you'll always be a chick to me, no matter what.

Anonymous said…
KNNCCB liao lar...lots of my closest frens are girls lar..how lar? Someone up there made a mistake by hanging a things between my legs?

No lar, to me its ok if anyone wanst to hang out more with whomever he/she chooses....as long as they feel comfortable and can be themselves..

Anonymous said…
My closest frens are always chicks after I left school, even up to now. Does that mean I'm more feminine??hahaha....I dont think so.

Anonymous said…
BTW, the post above is from me.

jamie, at least you're more 'balanced' in that sense lor...which is cool either way, right?