Go with original TVB series now that DVDs are el-cheapo! 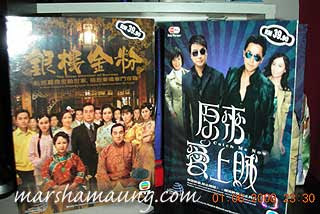 Finally! Finally, someone's made the right move, struck the right deal and is now giving illegal DVDs and VCDs players a run for their money! Being a series addict, I was once-upon-a-time also a fan of illegal stuff SIMPLY BECAUSE the legal stuff were so darn expensive! And we're a bunch of addict quite like a drug addict. If we cannot get the real stuff for low pricing, we get the illegal stuff because we're addicted.
And when you dangle a fat carrot in front of a hungry horse, it's natural for the hungry horse to eat lah, right? Normal, man.
Despite my talks about supporting creativity and fight illegal downloading or illegal DVDs and stuff like that, I'll admit that I have borrowed and bought some of the illegal ones as well. I hope I am not getting into trouble for that. To my own credit, I bought whenever the series really captivated me or when I got desperate. I also borrow most of the time because not all of them are 'keepers'.
Finally some smart fellow inside there made the right decision. To fight the illegal people, you have to compete with them. And somehow, they managed to bring the price of their original DVDs down to a fraction of the price without compromising the quality of the stuff!
KUDOS, man! Thank you, sir!
If you keep the TVB series at RM39.90 per box, I guarantee you that I will be the first in line to get all of them ORIGINAL. I swear on my knickers on that! Now, those illegal people are in trouble because the originals definitely better, now they're cheaper, can exchange easily if anything wrong with the discs and then got sub-title, got different languages (Mandarin and Cantonese) and also got the box nice-nice wan leh! How to resist? And now, it doesn't make much difference whether you get the original or the illegal one, why stoop low to the illegal ones?
Go ORIGINAL, man. Super cheap! 20 episodes equivalent to 900 minutes of entertainment equivalent to 15 hours equivalent to RM2.66 per hour ....hey low, you go cinema got so cheap or not????
Now that they've made their move, the Speedy Video people tell me that their DVDs are flying off the shelves. Even the small-small shops are saying that. So, why download now when you can support these creative people with CHEAP-CHEAP original stuff?