Drama Due to Price Hike In Malaysia 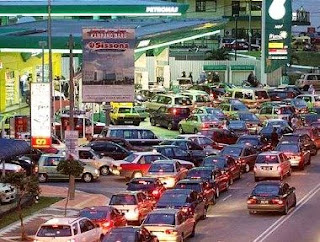 Even if you tell me that Justin Timberlake has come to 1 Utama, I don't think it would cause the kind of chaos we saw yesterday. I don't know about elsewhere in the country but the Klang Valley and Kuala Lumpur was thrown into chaos yesterday, particularly as we creep into evenings. To top it off, we've been suffering of rabid thunderstorms the past couple of days causing flashfloods and messing up traffic lights.

As I am writing this, the rolling thunder outside is reminding me that there might be more jam outside today if there are flashfloods or messed up traffic lights or accidents.

Yesterday, our dear beloved much-adored Prime Minister released the news that there will be DRA.MA.TIC increase in the price of fuel. Wahlau-eh, the effect damn geng-chow (out of this world) as SMS messages started circulating, emails sent, phone calls made. By a stroke of luck, I filled my little Waja up the night before not knowing about the price hike today. Somebody loves me. But the moment it was announced, my cousin called me on the phone and we yikkety-yakked about the increase of SO MANY THINGS in Malaysia these days. I complained to him about the time I went for a pack of rice and saw that it went up to nearly RM30 for dunno-how-many-KG when it used to be RM18-something-ish. He was driving when we had that conversation and coincidentally, he was said that he ran out of petrol while fetching his wife back from work. "Walamak! Eh, what's going on here lah! Why so many cars in this bloody stupid petrol station wan?" he screamed. I also didn't expect thing kind of commotion mah, so, I ignored him while we continued with our yakkety-yak about pricing of stuff. The suddenly, he shouted, "Ma fulat, the stupid lady taking so damn bloody long time to put the stupid Mastercard into the pump. Ask her to stuff it up her ***** lah, like that! Niamah" "Ha ha ha ha", I laughed. Then he tulan kow-kow and said, "Eh, we talk another time. I want to go and see what this stupid f*****g lady is doing to the pump". End of conversation. I laughed lah, so typical of my cousin. Then my sister and countless friends SMSed me about the hile of fuel prices. I was at my in-laws lazying around and working at the same time. It hit 10pm before the kids were ready to go home, so, I ta-powed (packed) the kids and all our stuff to go home lah. Just minutes out of the junction, we came to a roundabout. Roundabout got four exits, right? One exit jammed up, never mind. But I rounded the circle a couple of times trying to decide which jam is shorter, man! All of them were jam packed with cars because along these junctions, ALL also got petrol stations! DRAMA, man! I passed LDP (heading towards Kepong one) and was aghast with the number of headlights there were! The jam has to be a couple of miles long! Actually, considering the length of LDP and how the cars were not moving at all, I think it had to all the way to Genting Highlands, MRR2, Kepong, Sungai Buloh and back! Today's e-paper for The Star is filled with nothing but petrol here, petrol there. This price go up, that price go up, electricity go up, bus this, bus that, chicken go up....etc. Marder, even gas delivery service also go up! Tell me something that isn't going up. What is the blardie government doing about this ah? Inflation coming, everybody take cover!!!

RinG said…
not only in Klang, the whole country is affected with massive jam and one of the innocent creature in those 'sea of cars' is me!
June 5, 2008 at 5:28 PM

Marsha Maung said…
ring, ya lah, i really pity the people sitting there seething and breathing fire, man. Summore, the news came so suddenly like 'Tomrrow fuel more expensive ah, better go pump now' and everybody kelam-kabut. I tell you, there MUST HAVE BEEN a better way to do this. Cannot slowly slowly, but must fast-fast kill everybody. What de...
June 5, 2008 at 9:57 PM

Jamie said…
i was right la cuz...the bitch had her card slotted up her c*&t...I helped her take it out with my screwdriver and car jack ( and also got my petrol filled up )

The reason we sohais are in this predicament is becos we let the sohais govern our country...we have the power to change but being the sohais we are wtf!! all talk and no action = sohais govern by sohais..

increased prices = inflation = recession = violence becos no money to make ends meet liao...just be careful when you guys go out becos there might be an increase in theft and such...all the best!!
June 6, 2008 at 11:24 AM

Marsha Maung said…
if someone don't shoot the fler or he dont step down soon leh, sooner or later, i tell you there'll be a price tag on his head, you know.

dont make me scared to go out lah. enough that petrol is so expensive, but now scared to go out ppl rob us and all that, how to cont living in this ;ttrruuullllyyy; ASIA country?
June 6, 2008 at 11:39 AM