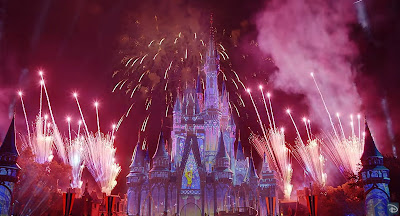 Did you guys see this year's Disneyland fireworks? Disney celebrated its 50th year with a spectacular firework extravaganza that lit up the skies of those who were there and the hearts of those who has a special place for everything magical about Disney.

No, I did not catch it at Disneyland because...you know...COVID and all? I caught it LIVE on...beat this....Tiktok. Someone was streaming the thing on Tiktok so I got on it and watched it in the middle of the night.

Yeah, the wonders of the internet.

I remember bringing my boys to the nearest Disneyland I could afford to bring them to...the one in Hong Kong...when they were really young. They were like 7 and 5. It was ME who was elated at the entrance. It was ME who wanted to take a picture with every Princess, and Mickey, Goofy, and Donald (the duck...in case you're wondering, lol).
I expected the kids to be caught up with the whole reverie...but in all honesty, they couldn't be more aloof about the whole thing.
The only thing they remember about Disneyland was the Tarzan river and treehouse, that Buzz Lightyear alien shooting game, and maybe a little bit about the 4D show we went for. And that's about it, I think. On the other hand, I remember everything vividly, from the weather to the trains we took.
And especially the fireworks. I almost cried...because we nearly missed it when my kid wanted to take one more round on a very typical "self-driving race track". I tried to convince him that we could drive around pretty much the same thing at home but we won't be able to see the same kind of fireworks once it ends HERE, he wasn't having it.
It's hard arguing with a 7-year-old.
I nearly went ballistic at the parade. That's an exaggeration but yes, the spectacle was more than what I imagined it to be.
I don't know but there's something awfully magical about Disney to me. The boys? Yeah, sure, I think they WILL remember it as a part of their childhood but I have an inkling they will think more about Nintendo and Youtube than they will about Disney.
It's different because when I (and you too if you're around my age) grew up during a time when there wasn't an information overload. It was either books, TV, radio, or the occasional movie or cartoon treat.
In the age of the internet, handheld devices, mobile games, and free entertainment, Disney hasn't got a stronghold on the generation my kids were born in. And if I thought my kids were brought up wrong or weird, apparently, their cousins are pretty much the same. They're like "Sure, Disney's fun and all but....you know Nintendo?
Ugh...lol
Anyway, whether you're a huge Disney fan or not, you can't deny the grandiose. Yes, it's bad for the environment, the sheer length and breadth of the display, but...what's life without a little sacrifice, right? Hahaha....
Anyway, here's the Youtube video for the performance.
Happy weekend, everyone!
Love,
Marsha