September 10, 2019
It has happened before - me trying to get past the first chapter of a similar book, shudder my way through each and every sentence, dropping the book, picking it up and soldiering on (because I paid for the damn book), but then dropping it for real, promising to give it away to the next person who is into such somber depressing genres.

Well, Room the book was such a book. 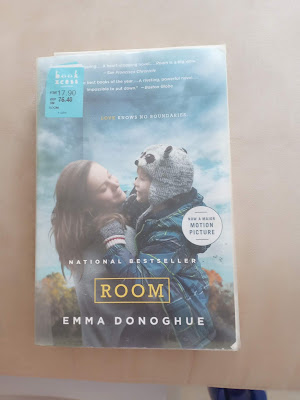 The setting is the kind of horrifying kidnapping, sex-slave situation that we all dread to hear about in the news. Young girl on her way home/work/friend's place/school who is kidnapped and kept enslaved for years on end.

The good thing about Room the book was that it was written in Jack's, the little boy of 5, voice. Emma Donoghue managed to keep readers away (we can assume the usual horrifying things that happens in such situations) from what happens when he's not privy to it. The rape, beatings, capture, depression, sense of hopelessness, and the dying of the soul as Joy spends seven years in captivity raising her son.

Jack describes it as 'when ma is Gone'. And rapes are described as 'creaks' when he is hidden in the closet.

The innocence of Jack's narrative makes it bearable, honestly. Otherwise, I would have dropped it like all the other books of such theme. Despite struggling through the way Jack's thoughts were written (in baby ways), Emma Donoghue spared us the gut-wrenching details that we can safely assume to be true.

I would give the book a 3.8/5 Stars but I went on to watch the movie as well.

Jack turns out to be older than I thought he should be. It dampens my imagination of an innocent child although the child actor was brilliant. Maybe because the screenplay was also written by none other than the author of the book itself, the movie plays out as realistically as the book itself - WHICH IS AWESOME!

How many times have we readers come off disappointed with how to movie turns out after reading the book? Countless!

Don't get me started with the worst of them all - The Time Traveler's Wife. That's a disaster of a movie that turned out NOTHING like the book. Instead of a pulse-racing story line of time traveling and a patiently loving wife (and wife-to-be), the movie was a bloody romance instead.

Either way, I was more touched by the movie than the book itself...maybe for the first time ever. This was before Brie Larson became Captain Marvel but there's still much room left as far as her acting skills is concerned. But the despondency is clear. She was depressed but keeping it together for the sake of her kid. She was just a twig waiting to snap.

I liked both the book and movie, however, because it not only shows a very raw side of motherhood, a young girl never given the chance to live out the best years of her life, the feeling of being deposed from society, the naive thoughts of a child who has never seen real sunlight, and the painful reintegration back into normal society.

It's a haunting story but all good in the end. It'll make you think about the smallest things in life, things we take for granted.

Have a splendid day ahead!
Love,