December 18, 2018
It sure took me long enough to get to this drama. Life was such a whirlwind. Damn, I should have gotten to watching this much, much sooner! What an awesome break from the normal romcoms and melos this one turned out to be.

Don't let the poster above fool you, it's more complicated and darker than I thought. No one actually sat in the back of a truck eating watermelons. There are also very few fluffy scenes to be seen. Liars. 😉

The hour-long episodes were each neatly divided in half; 30 minutes focusing on the current (2017) and the other half on the future, 30 years later. While it was confusing from the get-go, after finding my bearings, it made me sit up a little taller every night as I cap my day off. I've seen sci-fis (the non-scary ones) but this kdrama was trying to stretch the story-telling boundaries. I am impressed.

I've always had my eyes on Yeo Jin Goo not because he's cute (well, he is; please refer to picture on left below - I meant cute as in really cute) but he's the male Drew Barrymore of the South Korean film industry. 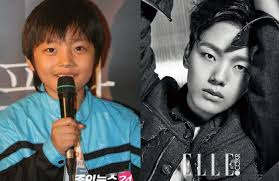 You know how we sometimes secretly hope that those child actors screw up their lives so that we can tsk-tsk-tsk at their wretched life choices? Well, Yeo Jin Goo's got his head screwed on straight and he's good at it too. Isn't it amazing that someone's found his/her calling at such a young age?

Going from a cute 8-year-old kid actor hiding behind his mother to a sought-after actor is no mean feat. Actresses watch in anticipation as he was growing up and spreading his wings, looking forward to the day he becomes old enough for kiss scenes. LOL sorry....you pedophiles.

Back to the story. What got a little confusing was the fact that a few actors, different actors, played the same roles. For instance, Kim Bum-Gyun (whose name itself is like a bloody tongue-twister as it is). 3 actors took on the same role! If that doesn't make your head explode, one actress literally played 3 roles. Yeah...see what I mean?

I like the concept, though. Of a deteriorating planet earth coming up with a solution of dividing the world (well, South Korea, at least, for this show) into one that is normal, filthy, scummy, hazy and crime-filled, and another that offers sterilized floors, clean air, and a crime-free lifestyle. A crazed scientist who went nuts with alien technology. A story of greed and the desperate grasp for control.

To get into the 'Smart Earth', you'd have to embed a computer chip into the side of your neck, allowing a supercomputer to remove your memories and control volatile human emotions. The lack of emotion is used as a selling point for those running Smart Earth. Everything, however, is recorded ON the supercomputer; there's no hiding. While the technology is used as a form of escapism, it is also highly invasive and easily manipulated.

Although it started off as an alien-themed sci-fi, it veered off the path. The alien that came crashing down on planet earth was referenced only sparingly. I got the feeling that there were maybe too many storylines to run concurrently in one show and using the two-themed concept, I can see how and why they would either run out of time or ways to slot in the sci-fi side of the story. There are only 12 episodes.

And I LOVE the idea that the kickass hacker who both created and hacked into the supercomputer running Smart Earth was a woman and not a man. Yes yes yes...please excuse my feminist fantasy. How many female hackers have we seen on screen compared to men? Exactly.

Did I say Spoiler Alert? No? Well, spoiler alert, then. #lol

Although it should have been the trailblazer of Kdrama world, I wasn't surprised to learn that few South Koreans were as into it. The show garnered more attention on the international stage. South Koreans prefer their melodramas and this shows in their national ratings.

The script was too bold and modern for melo-loving viewers. It dared to be different. It broke the mold. It was one of the first few sci-fi-themed South Korean series I've watched that impressed me (I don't even watch soft-thrillers, for crissakes). I don't like to be TOO thrilled with anything. #lol

You get the picture.

SPOILER ALERT. And whatever anyone has to say about the ending, I think it's the only way to do it. Alien and clone? Perfect. Happy ever after. I hope they have a follow-up with these two immortals kicking asses in another series!

Circle Two Worlds Connected is one of the better watches I've seen so far so, if you have some time, grab some wine (or orange juice, whatever, ok?) and give this a shot. This might be worth your dime.

Over and out,
Marsha