May 11, 2018
For me, it started the last election, or to be more precise, BEFORE the last election. It was when I realized that I had the power to make changes in this country and we have all been living in this self-induced indifference all these while.

We've, people like me, have never voted despite having the chance to. We've been marginalized and sidelined for as long as we've known but we've also accepted it as fate. You don't have to take it from me, take it from Jennifer Pak on BBC with her piece on Will Malaysia's Brain Drain Block Its Economic Ambitions? 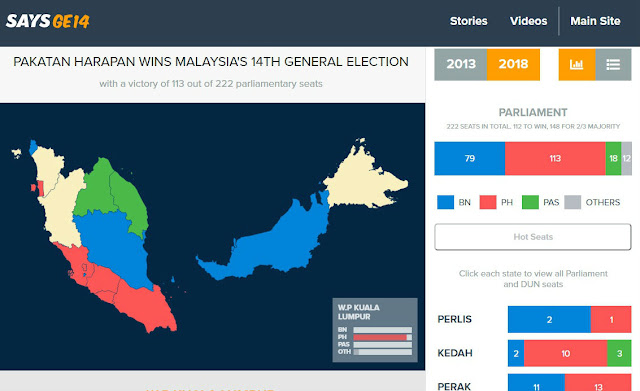 Because of the very scary racial clashes of May 13, 1969, which people of my parent's generation continue to 'fear' and 'mentally block out', people have generally looked away whenever there was injustice and accepted it as their deck of cards.

We just have to work very hard, harder than everyone else, to move away and make our livelihood 'somewhere else'. Sometimes, that translates to 'anywhere else'.

It doesn't make us very Malaysian, I know, but that was what it was. We no longer wanted to fight with the majority and suffer a consequence that we could have prevented if we just looked away and kept our noses on the grindstone.

The good part of looking away was the fact that Malaysia has educated us well and was generally accepted as truly hard-working, well-educated people who didn't take opportunities for granted. We had much to contribute, if not for our own country, for other countries. And many other countries took our talents without hesitation while our own country snubbed us.

Thanks for educating us, and then propelling us forth looking for people who would open a door for us, because it is this that helped us open not just doors, but seeing eyes.

In a lot of ways, Malaysians were homeless talents who were aided by people who saw what we really were made of. Much more than the government gave us credit for.


So, What Changed the Malaysian Political Landscape?

Leaders who were becoming arrogant, self-entitled, made no bones about sidelining our next generation (our children - this is the X spot for this generation that the government should not have held hostage) as well, thought of themselves as invincible, and closed all inroads to improvements demanded by the people they were meant to serve.

They have forgotten their place on this planet. In my personal opinion, it's never a good idea to forget where you came from no matter how far you go in life.

This, of course, brought on the ire of the very people who the government have forgotten about - those who fought so hard to survive while being sidelined. They've forgotten that because of biased policies, it has made us harder than steel. We've become diamonds. Mere weeds to the people of power, but overlooked and underestimated gems in the rough. We were shackled but hardy and very scrappy.

But we can only go so far with our urban votes. As shown in the result of our General Elections in 2013, the reaches of urban voters had its limitations. Malaysia is made of our other counterparts as well. We needed to unite with others who were fence-sitters, who were suffering silently, who saw nothing but hopelessness, to encourage them to come forth and make their stand, to tell them that the time is ripe.

Thanks to the power of a 93-year-old man who was already in his retirement, the people were persuaded.

I am no Mahathir fan because he can be ruthless during his younger days. Some (himself included) would have called him a 'dictator' or an 'authoritarian'. He would not hesitate to make a move if he thought the move was right. You can argue that he had resolve, he had the guts or you can say that he is a stubborn. He definitely would not hesitate to put hammer to gravel if he thought it warranted so.

Like many, I was suspicious about his motives. With a cocked eyebrow, I thought about what more did a man like him want? He didn't have to come forth again. He had the money, the fame, the name and he quit the game while ahead. I argued internally with myself for the entire campaign period and can only come up with a few reasons - two of which were that he loved this country and he hated what Najib was doing.

It was, honestly, shocking for me to see his former adversaries accepting, forgiving and welcoming him. They were ready to ditch their party flags, set aside their own personal and party principles to come together with this former-PM to bring down a regime. It was shocking because I wasn't ready. Hands were shaken, alliances were formed, agreements were reached, and targets were set.

It struck me that if people who were jailed by him were ready to move on, who am I to not do so? He may not have been perfect but he was our only hope. We've seen how close we could come in 2013 but it wasn't close enough. We needed the X-Factor and THIS could be it.


Setting Sights on Rebooting the Country

The questions is then - do we want to reset this country? If we want to, this is what we've got to do. We've to set our sights on the bigger picture, the country. This former Prime Minister was willing to be used as a tool to bring as many people together as possible, are we willing to use him?

So, together with my other urban, suburban and rural voters, we've united under ONE flag, abandoning our own agendas for a while, and set our sights on that reboot button.

And we did it, Malaysia. We did it and I am so proud. I don't know where we go from here but we are going somewhere better instead of on a downward spiral.

Malaysia is finally a proper democracy.