Book : The Lucky One (Nicholas Sparks)

March 11, 2018
Much to the surprise of many, I am a homebody. Despite my party days and tumultuous early adult life, much of which involved partying, alcohol and throngs of people, at the heart of me is a bookworm.

Although I watch my fair share of dramas and movies, nothing beats a good book in my hands. With coffee, tea or wine.

The Lucky One is a story I've watched before I read the book. Something seemed suspiciously shallow about the movie and despite seeing that it only has about 20% on Rotten Tomatoes with reviews like...

...I decided to get the book when I saw it in BookXpress. 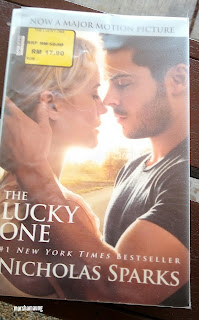 I feel in love with the poised romanticism showcased by Sparks in The Notebook (I mean, this is a girl's painful yet satisfyingly romantic fantasy, isn't it?) and I've also followed it up with other notable books like Message in a Bottle and Dear John, and I refused to believe that the lackluster movie represented what Nicholas Sparks had to offer.

It was so empty, the characters so devoid of personality, the situation so mundane and the entire script appeared mediocre that I started asking myself if this was written by an amateur writer or had Sparks lost his spark? I kept waiting for someone to explain something....but no one did.

The salvation was the drool-worthy Zac Efron...which happens to be...ahem, the only reason I watched the movie, to begin with. XD

As it turned out, there's a reason why Zac's portrayal was like a walking piece of wood. The character IS a piece of wood. Suffice to say, Zac is much more of a looker than what I imagined the character to be (scruffy, not bathed in days, eating trees and barks, walking across the great, big American continent on foot, etc).

What's missing is the biggest point of the story - the lucky charm.

Scott Hicks turned a story about an unbelievably lucky man (someone who survived various wars, with his friends dying around him, and credited the picture of the woman in it, for his supposed luck - something he inwardly hoped was true but secreted doubted till the last few pages of the book), into a simple romance flick with no substance. The last few minutes of the book summed up every other mundane filler in between the covers of the book.

Zac's portrayal of Logan was both on-the-spot and yet stiff as a board. Logan was written this way. He hides his feelings, is anxious around strangers, always on-guard, is a regimented, principled and disciplined ex-Marine who continues to respond to people with 'Yes, Sir', 'No, Sir'. Because of possible PTSD, he had trouble sleeping and sometimes imagined things. He had a tough time breaking out of his marine mold and the soul-shattering deaths he was once surrounded with.

Sometimes, a movie's gotta skip over points in the book for the lack of time, which is understandable. This happens all the time. But some things are not meant to be skipped over and it could result in a film missing its mark.

This is such the case.

Although I wouldn't say that The Lucky One is Nicholas Sparks' best OR worst work, there was a mystical element that I found a little hard to believe but it could have saved both Zac Efron and Taylor Schilling being less of mere show ponies.

The book would, however, make for a relaxing weekend read. As you can see from Amazon, the book fared much better than the movie and it cements my continued belief that movies will often do books no justice.