September 20, 2017
Alex Cross, yes, I've heard. Lindsay Boxer, first time. I didn't even know James Patterson wrote women, not being sexist or anything, but in my mind, his characters had mainly been gun-totting, macho, beer-guzzling, muscle-bound policemen and investigators. Until now, I didn't know Patterson wrote pregnancy...maybe that was, in large parts, contribution from Maxine Paetro, his co-author for this book, who must know a little more about baby bumps and contractions.

I suppose I ought to try reading his other Women's Murder Club stuff. 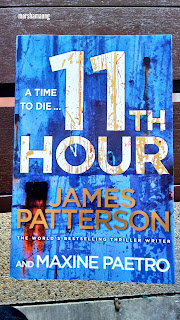 I was not too sure if running two murder mysteries concurrently in one book was a good idea. Although there wasn't much confusion, there were points throughout that I expected the two to mesh or come together, to present me with a ta-da surprising twist.

It's refreshing to have a pregnant woman play the tough cop for once and I have to say that, from a chic lit reader's point of view, it's....new? #lol Stephanie Plum (Janet Evanovich) doesn't count. She's a bounty hunter. And she's not bad ass, she's clumsy as sheez, attract explosions and car accidents for no apparent reason and she's known to weep rivers of tears. And Patricia Cornwall's Kay Scarpetta is a doctor...a medical examiner, to be more accurate.

But I DO like the idea of an all-women's unofficial crime-solving group of BFFs. They're not buying the latest LVs, for once, and putting their heads to together to solve the latest scandal.

Another spoiler alert : So are the bad guys...girls...guys...

Patterson, true to his style, is a writer with few flowery words. Except for exhaustive descriptions of locations, streets, buildings, directions and color of clothing, he doesn't mesh his stories up with too many descriptions of the color of the sky, the chirping of birds, the shape of flowers and the season of the year. It keeps the stories, both of them, going at a pretty heady pace.

If I had a complaint, there wasn't much emotion. She's pregnant and filled with hormones like the mushy water balloon that I was, right? Come on, then! #lol

There was also a lack of explanation towards the end. It was abrupt and even the sudden emotional drama with her husband was a little shortchanged. In fact, I would venture to say that Lindsay Boxer could be a man in women's clothing. #LOLOL Maybe I should read the other books to see if Patterson actually wrote tear ducts into this character.

I give this book a 4/5, nevertheless.