PJ folks like us have always had the privilege of always driving around from one destination to another, whether we want to go shopping for groceries or meet up with a colleague for lunch. Rarely, for people like us, would we actually make an effort to use public transportation.

And that's where the problem related to traffic congestion lies for PJ people. The outflow of traffic out of PJ during the morning gridlock and inflow of cars and bikes back after office hours is something we deal with. An ideally 15-minute to 20-minute drive could potentially turn into a 90-minute road-rage-horror ride, especially when there's rain and flash floods.


The city was developed during British Malaya on a piece of 1,200 acres (486 ha) rubber estate (the Effingham Estate) around Old Klang Road to address the overpopulation of the capital Kuala Lumpur in the 1950s - Wikipedia

So, needless to say, we, as a family of three, have never really taken...or rather, purposefully and intentionally, tried out using the LRT (Light Rail Transit) for ourselves. It started off with a rather heated conversation with my trying to break out of my iron fist control son(s) who argue that they've never been on a subway/LRT/MRT/train before.

I argue that we have in various countries, in KLIA (you don't have a choice here because you want to board the plane, you board the train), and another time when they were young (too young to remember, they say).

It's an argument I can't win. They say they can't remember, that's it. No argument-win for me.

So, defeated, I said 'Fine. We'll take the LRT and try to make our way to MidValley'. (The story behind this is that they wanted to take the LRT with their friends to the mall without first knowing how to use the system and the way around). I, as the Mother of the Fucking Universe, OBJECT.

BUT....I'll do it WITH YOU first and we'll go from there.

Listen, I can only be comfortable with them doing it themselves when I KNOW it, AND know that THEY know it. They've got to show me their willingness to learn and ability to navigate around before I can let them go on anything without me. That's my job, end of story, no more need to argue with me, talk to the hand, END OF NEGOTIATION. LOL! 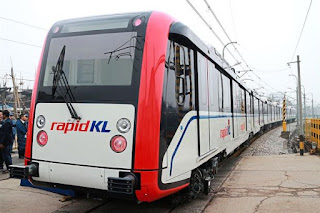 So, that's how we ended up taking the LRT to nowhere in particular and taking it back. Suffice to say, it was all great except for the chilling sound of breaks on the LRTs but it was timely, efficient and got us to where we wanted to go.

The problem is getting to and from the stations itself. After the taking the train back, we stopped at Kelana Jaya at about 10-ish and were willing to take a taxi back home. Surprise surprise? The taxis won't go by meter, pretended not to know where was our destination and gave me a whole cock and bull and then said they would have to (like it was too troublesome and we live  too far - HELLO, GPS!!!! It's less than 5-8 minutes away) charge an exorbitant fee the extremely short journey.

I mentally asked them to go eff themselves, got as far away from them as possible, got on and then got off a Paradigm Mall feeder bus, crossed the overhead pedestrian bridge and called for a Grab Car (an Uber equivalent) from the bus stop and got home for half the price.

And lazy ass taxi drivers who hang around train stations and malls still complaining about Uber and Grab? I gave you a chance, guys. In fact, because my Uncle is a taxi driver, I've always tried to give taxi drivers a chance but time and time again, you taxis disappoint me with your never-ending condescending attitudes, thinking that we STILL don't have an option but to take your sorry ass taxis.

You know what? With your attitudes, if there was no Uber, Grabcar or a relative willing to escort us back home from the LRT station, I would risk being robbed in the middle of the night just to walk home. Just so you won't live the rest of your life thinking that people owe you the ride and that we have no other alternative.

The world has changed, assholes. Change along with it.

All in all, my kids said that the effort was eye-opening and it was kind of fun to do something on-the-whim. Just because.