Woe is the World

June 05, 2017
While I agree that despite efforts to curb global warming on a global level, such as the one shunned and rejected by Donald Trump, has done little to medium-sized changes, has much to want for, it's efforts, no matter how small, should NOT be abandoned.


President Trump said that he will pull the U.S. out of the Paris climate agreement, steering away from a group of 194 other countries that have promised to curb planet-warming greenhouse gas emissions. The news came just days after he attended the G7 Summit in Italy, where the six other member countries—Germany, Italy, Canada, France, Japan, and the United Kingdom—reaffirmed their commitment to the 2015 climate pact. - National Geographic

America is pulling out as a COUNTRY from world-efforts to reduce carbon emission, to save the planet, reduce human footprint and to protect the environment. To me, this is akin to abandoning your home. After all, Planet Earth IS our home. I honestly do not see where he's coming from although I have been unfairly judged for being a stubborn fence-sitter and always too-willing to see the other side of things.

Everywhere in the world, people are balking whenever nature is dealt with improperly, including this woman for kicking limestone stalagmites. Such reactions are warranted because human population has reduced Mother Earth to only a fraction of what it used to be...and everything should be done to reduce any damage, if not to reduce, and if possible, reverse, evidences of our destruction.

The funny thing is that while global change is hard, it should not be abandoned. Because global leadership is needed, global concensus is what ensures that we walk the same path the world over. To make small changes everywhere, for everyone. For instances, WSJ outlined changes that fishermen and farmers can make to do their part for the effort - and THAT's a big thing in a small way. We start with you, we start with me, we start with we and we start with us.


He is a man free of morals. As has been demonstrated hundreds of times, he is a liar, a racist and a cheat. I feel ashamed to use these words, as sharp and loud as they are. But if they apply to anyone, they apply to Trump. And one of the media's tasks is to continue telling things as they are: Trump has to be removed from the White House. Quickly. He is a danger to the world. - Spiegel Online

I am in no position to decide or opine on whether Trump should be removed from office but I do share the opinion that based on some of his decisions, he COULD be a danger to the world. I refrain from saying anything about his travel ban as I live in a Muslim-majority country and have faced racism with my very existence in this country alone but to shun Mother Earth as a whole (as in shunning Muslims as a whole) is a broad brush tactic that should be used only very sparingly.

Selangor and Penang (two States in Malaysia) has been doing everything within their power to do their part in enforcing and forcing residents to reduce the use of plastic, recycle, plant trees, go paper-less, etc.


Selangor state exco member for Tourism, Environment, Green Technology and Consumer Affairs, Elizabeth Wong hit the nail on the head when she said that traders can be fined and their licences revoked, if they remain defiant on the ‘no free plastic bags’ bylaw. - MalaysiaKini

...and for years and years and years, we've been fighting air pollution as a result of peat forest fires all around Malaysia and Indonesia (we're approaching that time of the year again too).

We could all do our part by doing simple things, like using fewer plastics, paper, throw away less food, segregating our rubbish, bringing along our own bags for shopping, reduce the use of plastic bottles, refuse polystyrene packaging, planting our own food...the list can go on. But at the end of the day, we need a leader to move the world along.

I hope that if America refuses the role of the Leader in the Environmental Movement, at the very least, the individual States (as they have positively mentioned before, that they will NOT abandon their environmental efforts, against the will of the Federal decision) and will forge on with their own little efforts. Like New York turning Green in their own support for the Paris Climate Deal.

Here's an infographic that I've saved on my tab for future reference. 'Future reference' because I've yet to get my hands on those illusive white and blue garbage bags. Where art thou, you damn things? LOL 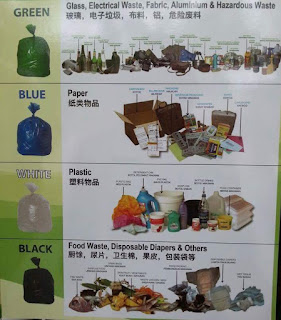 If I am not mistaken, the above is applicable for those who live in Selangor, Malaysia. Check with your local authorities for proper waste disposal and segregation.

For those who are not able to view the above image:-


Have a grand Monday ahead, people,
Love,
Marsha