Semicolon - My Story Isn't Over Yet

October 06, 2016
Some hide it, some shut up about it and some choose to say something about it and is shunned back into silence. This is what sexual assault does to people and some people survive, others don't. And no one is so alone in this world that they have no one to turn to. Tara Stiles also opened up about her experience with sexual assault which spiraled into an eating disorder and social isolation. Things can happen that way. Some go into depression and it is a very real thing.

When I was an entertainer, being 'assaulted' by drunk people was quite the common thing. Even the guys got groped whenever we were required to mingle with the customers. So, we would laugh over it and say nothing else. But why is it OK, when I think about it later? Because if I said it bothered me and the other girls and guys said nothing, it would make me the bad apple, wouldn't it? So, I kept quite and became a little extra vigilant just to keep everyone liked.

I come from a family of people who deal with mental disorder and depression, hence, when I saw the semicolon movement, I was moved enough to nearlyyyyyyyyyyyyy get one myself! Me? Tattoo?! Hahahahahahahahahahaahahahahaha

Here's a bunch of pictures of really brave people who got their tattoos and I have to admit, some of them are really pretty and creative!

So, when I was scrolling through my Instagram one day, I saw Ashley Jewelry selling semicolon bracelets and I couldn't resist supporting it. So, I got this online and it arrived today. 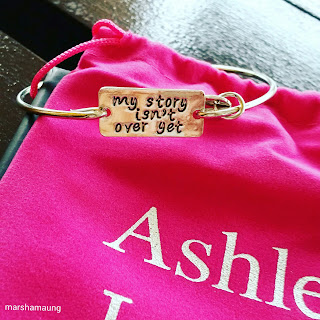