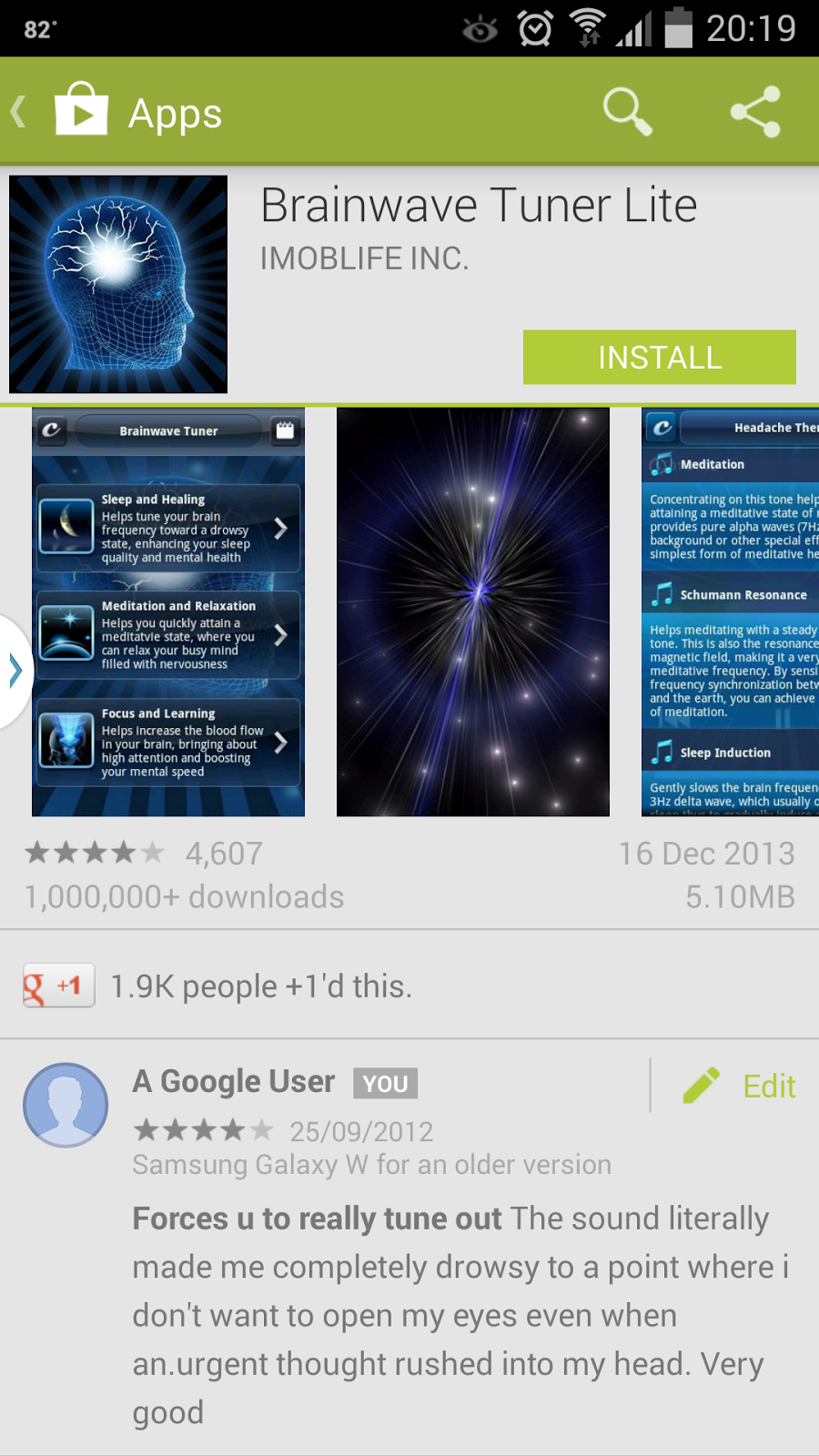 I have heard loads and read much about sleeping and brainwave and I saw someone write something really awesome about an app called Brainwave Tuner. The lite version of the app is adequate but the full version gives you better control over how you use the tool. The lite version is good enough. I am writing about it because my 'test' was totally bizarre!

I wish I can say I had an out-of-body experience when I used it but...well, it was close.

Once you switch it on, the waves will almost instantly make you feel drowsy and sleepy. It is hard not to feel sleepy even with a full night's sleep.

1 hour is too long a time to set it for a nap because what the waves did was to arrest the conscious part of my mind when I sleep. A nap is short therefore, there will come a time when your subconscious mind will come awake and you start what we know as REM sleep.

What happened after my mind woke up from the nap was that the part of my brain that was in charge of physical movements was...doped. Hence, what happened was...night terror. In the middle of the day. During a short nap.

Night terror happens to babies a lot and sometimes even kids have it, but it is quite uncommon for grownups. If you listen to Old Wives' Tales, a night terror experience is like a ghost/spirit holds on to you and arresting your movements. In science, it is because a part of your brain, which is in charge of physical response, is not yet awake.

I remember my brother having it one night as a kid and the result was a quick visit to the Temple to 'chase away the evil spirits'. =)

We all know what it is now and know for certainty that it has nothing to do with evil spirits. It is just your brain's response.

So, half my brain was aware of everything around me, I can hear the Brainwave Tuner, but I couldn't get it or move. Lucid dreaming happened, then. I forced myself to go back into the dream to try to find my phone (which was playing the waves). Every time I found it and switched the waves off in the dream, it came back on. Trudging from room to room (which looked exactly like my home), I hunted for the tuner.

I just couldn't find the right device. After switching off (in my dream) my phone, laptop, tab, kids' laptops, kids' phones, I gave up and decided to slip back into dreaming.

It is funny because I was aware of the fact that I was dreaming and there was nothing I can do about it. In Lucid Dreaming, you can control the (a part of or the whole) dream. I am controlling my dream while trying to do something physical (the tuner which is happening in the real physical world).

But hey, it works but using it for a good night's sleep is a much better idea and set it for no more than 30 - 40 minutes just to tune out.

To no more out of body experiences,
Love,
Marsha
=)