The Taxi Ride I Will Not Forget

August 07, 2013
OK, first off, I will admit that part of the reason why I went to South Korea was to attend a Shinhwa concert. It was awesome and a much anticipated one. 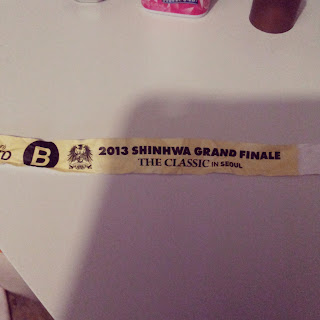 But anyway, that is not what I am writing about today. So, we stayed around the outskirts of Gangnam-gu (not intentional, it was because the lodging was cheap and had 5/10 or 6/10 score on Agoda - check previous post about how THAT turned out) but the concert venue was at Olympic Park which is in Gangdong-gu which effectively means that it is across a river or some stream. It wasn't far-FAR but far enough so, I decided to cab the ride there because I didn't want to miss the opening.

The ride there was fine, a decent old man uncle who DIDN'T UNDERSTAND THE WORD 'OLYMPIC PARK' in English. *shakes head* How different can 'OLYMPIC PARK' be in Korean as opposed to it being in English, I don't know. ..what. Oul-leum-pichke Phark-he? That totally sounds like Olympic Park to me! Anyway, even when I pulled out Google Maps and Translate for him, he struggled. Angst max.

But that wasn't the taxi ride from hell.

After the concert was over and done with, to save time, I was willing to spend on another taxi ride with those ready-for-you-I-parked-here-waiting-for-you-so-I-will-charge-you-more taxis. I was the first one in and sat on the front passenger seat. We took off when he had sufficient four people in the cab.

He is a jolly fella who made jokes with me all the way. Very friendly. Nice cab. He has a tablet on the dashboard (and played Shinhwa songs from it and blasted it through the cab's sound system just...for...us...special service, choono) but that is not where the problem is.

Attached to the tablet is his phone. He only answered his phone like...I don't know....forty seven times?!?!? After each time, he would joke with us in Korean 'See, see? I am such a busy person. And I have to fetch each of you home directly. I am so busy'.

I got tense cos...you know, I kinda wanna see my kids again. So, I told him that. First he asked my age and then got into mock shock (I don't know whether it's real or he is really doing incredible customer service here) at my age (and flying all the way here for the concert....well, partly) and to hear that my kids are already so big.

And then he assured me that I will see my kids again before answering his phone and beating a read light...all this while saying, 'Don't worry, I am the best-te dri-ber (best driver). Don't worry, don't worry!'

I had something to munch on earlier before getting on and by then, I have forgotten to eat it, just O.O at the speed he's driving and the number of lights he is beating and the sheer number of phone calls he is answering while surfing the internet on the tablet for more Shinhwa songs to play for us. I took over the tablet....LET ME DO THE FKING searching in FKING KOREAN (I don't read Korean but I will lie if I have to) and let him do the driving, good heavens!

We dropped the others off, and lucky me, I was his last passenger...yay. It has to be this way. =.='

During the last leg, he asked me my age again and went into acting mode again. Then answered more calls, beat more lights, swerved at incredible speed down a hilly terrain while assuring me that he is the BEST DRIVER IN KOREA and then tried to take the remaining food that I am holding and tried to throw it out of the window for me cos I am not eating it already....swore at a smaller taxi in his way and then giving way to a larger cab that was honking him down (even cabs have a hierarchy thing going there...bigger cars, bigger respect, smaller cars, get the F out of the way? LOL)

But finally, we arrived at Seocho-gu and I just leaped off at the speed of Sonic the Hedgehog. As entertaining as he was, I never found out his name, I hope I never sit in his cab again, despite him being the BEST DRIVER IN KOREA and all. I don't want to find out whether he was right or wrong.