January 16, 2013
It's been a long time since I have blogged about things I cook. Like I always say, there are very few excuses for people to eat out too often. Things can be simple, so simplify. I bought some chicken breasts from the market without really knowing what to do with them. I remember I bought a bottle of char siew sauce some time back. I know you are supposed to use char siew sauce on pork, but there is no rule saying that you can't use char siew sauce on chicken...or fish....or prawn....or cuttlefish....so.... =)

I marinated the chicken breasts with char siew sauce, oyster sauce, pepper, spring onion and some minced garlic. I bought some Eringii mushrooms earlier. They are kinda like longish kind of mushroom...not very pleasing to the eyesight, to be honest but then again....I tend to have a dirty kind of mind so... ^^ 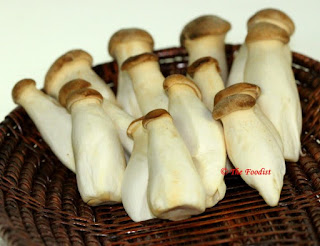 I sliced them up and lined them up in the baking tray after oiling the tray up a little. Kind of pointless, anyway but I oiled them just in case. Just a little bit. 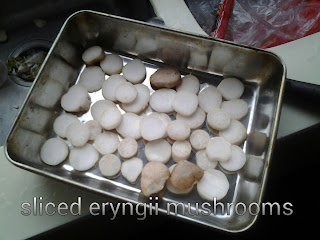 Then I placed the marinated chicken breasts on top... 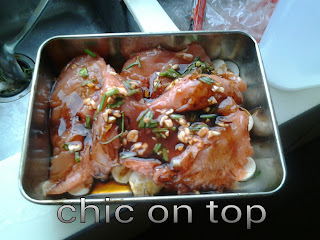 And then popped them into the oven after adding a teensy weensy bit of water, made some rice and soup....there you have it! Dinner! And it was yummy, by the way. I wouldn't post stuff that sucked. 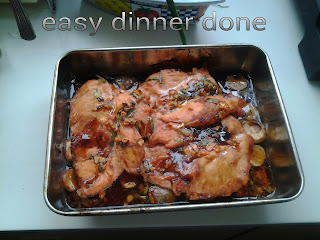 For those of you who are working, you can marinade the chicken and then put it into the oven before heading off for work. And then when you get home, just take it out, wait for it to warm a little till just about room temperature and then pop it into the oven.