Never Been A Cat Person

February 18, 2011
After having two boys who are, by now, pretty grown up and think that Barney is a sissy dinosaur, I don't relish the idea of having to be responsible for anything else. No more babies. No pets, thank you.

But fate has a very funny way to kicking you in the rear end.

This morning, after sending the kids to their homeschooling center, I came home, parked the car, opened the door, step up, walk to the lift armed with my sardine sandwich and got the shock of my life when the lift began to make funny sounds at me.

I looked down on the floor of the lift and there it was...this black, furry thing sprawled there going 'eugh eugh eugh eugh eugh'. Well, it sounded like that. My first thought was 'a puppy in the lift!' So I carried the thing and decided to go from house to house asking around if anyone's lost or dropped a baby puppy. Not before calling a pet-savvy friend of mine, asking her what to do with the damn thing.

When she asked me what animal it was, I just said, 'I don't know. I think it's a dog. Or a cat. Or something in between. Or a rat. Do rats make the eugh eugh eugh sound?'

Anyway, it is going to be hard trying to get the apartment owners to admit that they have dogs in their homes. So, to the vet I went and it was there that the nurse told me that it was a black cat. Not dog. Bummer. I really prefer dogs to cats, you know.

So, it's a cat and my guess is that it's hungry. How do you effing feed a baby cat with its umbilical cord still hanging there with milk? What milk? Fek. So, after scouting around for a pet store (lo and behold, pet stores don't open early here in Malaysia. I just found out), I found a pet store selling the little-little (oh so cute) bottles and kitty milk.

I drove around for so long, forgetting that there is ONE LARGE ONE just around the corner. Proves that you don't really pay attention or remember anything until you need it or use it.

I force fed the thing...the cat don't know that the stupid tit thing is supposed to be sucked on, man!

At this point, I am not too pleased with the fact that I have to be responsible for this cat's life (don't have the heart to throw it away) but I think the kids are going to have a field day with the thing. Ok, fine. With the CAT...not thing.

As with everything in life, I think I'll just do the best I can with whatever that I have been given. And I believe in fate...that he found me and he was meant to find me. 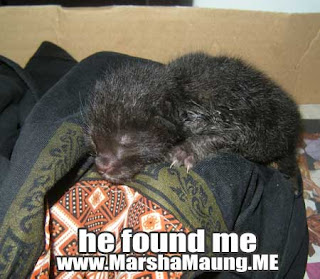