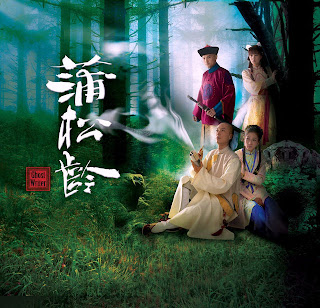 I am deeply, deeply impressed with this series...seriously...eventhough Raymond Lam is not in this series :-) Frankly, after a whole line-up of BORING, BORING, BORING shows (I won't name them...ah heck, example Fly With Me totally suxed!!!), this is a refreshing story. Just like 'Mysteries of Love', there is more meat to the story compared to the normal 'cat dog mouse' as pet storylines which cusks like hell.

First of all, there's powerhouse Sunny Chan and Steven Ma in here and the story really made good use of their talents. The chemistry between Steven and Linda remains in tact but the single person who impressed me the most in this series is Fala Chen.

For once, there is something very likeable about her character and her performance. Love the sheer innocence which made me guffaw a little here and there.

FYI, I bought the whole DVD without intending to watch it at first because...well...you know me...ghosts...hehehe... I am glad I finally grew myself some guts and finally watched it. It's not very ghostly scary after all. :-) silly me.

I would like to point out that I think Sunny's character suffered from what we modern people call Schizophrenia while in the end, I think Steven's character, Pu Song Ling, actually suffered from depression and post traumatic stress disorder because in one single day, he nearly lost his life, lost his best-friend, lost both the girls that he loved. I would go crazy too in such a situation, don't you think? :))))

To my niece, she preferred to see think that both the girls did not die and remain by his side to the end of his days while he lived as a recluse coming up with wonderful mystical, magical stories for the layman to read.

whatever view you wish to take, this is a nice series and is a keeper.