I Don't Understand Why Some Guys Are So Sick

April 23, 2009
I know of some psychos in my life. Some of them, most of them I would say, are harmless people who mind their own business. Others jump to conclusions and think that you're trying to bomb their house. Some imagine that you're linked to some mafia group.
But then they're psychos....not scary at all.
What's really scary about some psychos is that they don't have anything better to do that to do....stuff like this. 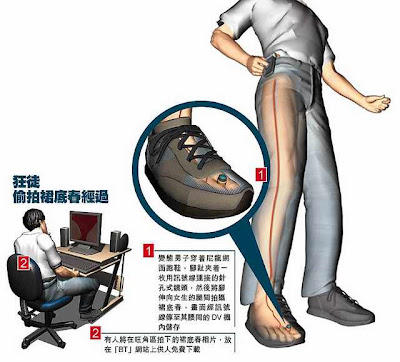 These psycho peeping toms take pleasure in snapping pictures of the underside of girls who wear skirt. According to my aunt's email, it happened in MPH and also Giant Malaysia. If you frequent these areas, wear jeans.
I thank my maker for making me love my jeans so much.
Nah! take lah take lah! Bloody perverts!
p.s. I have some racy pictures attached with the email but out of respect for those girls, I won't post them in my blog. Brings me down to their level.