Is Suicide Becoming a Trend in South Korea?

It’s so strange, weird and scary that it’s not even funny at all. In the beginning, I thought it was all a joke….apparently not. I suddenly found the dead spinach in my fridge funnier.

There’s something about that I really like – their never-say-die attitude and of course, my Prince Sung Si Kyung is there. But is evidently hit quite hard by the ailing economy. I think kimchi must cost quite a lot there by now. I thought their fighting spirit would have been able to carry them through a lot more….if China, Japan, Russia and the British cannot kill their fighting spirit…nothing else can, right?

Then why on earth have there been so many celebrity suicides in of late??? Countless celebrities, over the last seven years have chosen the ‘easy way out’.

I won’t go as far back as seven years. I’ll start with last month.

Last month, Ahn Jae Hwan killed himself in his car, leaving behind no children but a grief-stricken wife. The reason why it touched me was because Jung Sun Hee (the wife) is a good friend of my Prince. Apparently, he killed himself off because of financial debts amounting to more than USD$4 million or something to that effect. 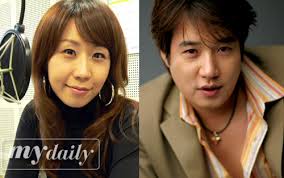 Look, the couple’s been married for less than a year. In the end, her husband went missing for three whole weeks. She hunted desperately for her husband but to no avail. Only that, the police called her up to identify a rotting body of her husband in a mummifying van parked in an obscure area.

Obviously, she was beyond being consoled. I loved Jung Sun Hee because she’s one of the best South Korean celebrities who had a very realistic comic sense. She’s funny.

Anyway, when Ahn Jae Hwan’s suicide was announced, people (Koreans are really mean to their celebrities) started pointing fingers…many fingers pointed at another celebrity, Choi Jin Shil, who was accused to forcing the former suicider to pay up a loan.

On the 2nd Oct, Choi Jin Shil was found hanging from the shower rail in her bathroom. She left behind an ex-husband and two young kids (7 and5). Choi was reported to have been in a depressed mode after her divorce but can a rumor like this drive her over the edge? Can a rumor override the sense of joy her children give her?

Jung Sun Hee was, once again, inconsolable. My heart goes out to her…to see this slapstick queen reduced to nothing but a bucket of tears.

Jan Chae Won, on the 3rd Oct is an entertainer who is…erm, borders on being unique on account of the fact that he/she is a transgender. Inspired by Choi Jin Shil’s suicide method, he/she hung herself on the shower rail in her bathroom too.

By this time, the rest of the world, for people like me, is totally shocked. But not shocked enough, it seems.

On the 7th October, ANOTHER one bites the dust….Kim Ji Hoo, a 23 year old performs another suicide act. He’s 23, for crissakes…so what if people accuse him of being gay? So?

FOUR fooking suicides in two months?? And this is just amongst celebrities and models alone? Heylow…doesn’t it sound absurd? Aren’t they setting up a bad example for the young Koreans enthralled by their celebrities?

Koreans, wake up!!!! What happened to the HWAITING spirit? Japanese, Russians, Chinese, English invaded for decades and you emerged united…apart from . And now, a little rumor is started and celebs start killing themselves off? Like flies?

Wake up, , wake up! Stop all that jabbering and finger-pointing. That’s a very stupid habit. Curb media, implement stricter online laws…yes, but please don’t forget something.

Depression is a curable disease. It’s because people see it in a negative light that nobody dares not say anything about it or go to a doctor to get help when they’re depressed. They’re afraid that people will say that they’re crazy.

It’s not like that! Depression is one of the biggest killers in the world…and it hits everyone in any one point in time. It’s just how serious it is that is different.

Take heed, and fuck what others have to say…if you think you need help, get help!!!! People need to be educated about how depression is not to be ashamed of…it’s normal and it’s OK to be in that situation.

Whilst it’s OK for one to remain in that state for a short period of time, action must be taken to snap out of it. I think Asians, in general, is a very highly stressed society.

Killing oneself is not an option!!! When you get help from a doc, now THAT’s BRAVE! THAT’s POSITIVE.

…listen to me….Enough is ENOUGH!

Jamie said…
I dunno much about Korea ( just been there twice ) but for me, suicide is the coward's way out..so there!!

Marsha Maung said…
jamie, I've been there 0 times, even worse. And I completely agree with you that it's a coward's way out. but it's also an epidemic...it shows that too many Koreans regard depression and stress too lightly or it's in their culture to disregard their own feelings. Perhaps, it's also they think looking for help is a weakness. Or maybe the whole culture is screwed. I dont know, man.

Marsha Maung said…
jamie, that's the thing....sad, isn't it? the govt should implement some kind of mental management program or start educating their people, man....
October 11, 2008 at 11:41 AM