October 11, 2008
I’m gonna post a short one today on account of the fact that my eyelids are heavy and I can’t stand up without yawning. Been a long day…trust me. It’s funny…the day is longer when you have to dwell on ONE SINGLE THING the whole day long as compared to say….writing five articles on…erm, stuff that my clients want me to yabber about…one by one. I stick religiously to my checklist and feel an immense sense of pleasure in ticking them off one by one.

Anyway, I’ve been meaning to write about this a long time but never got around to doing this. Thanks to my PDA, I have the time to jot things down when stuck in traffic jam when the mind doodles and doddles.

So…here we are, stuck in a traffic jam. Everyone’s annoyed at the reason why the traffic’s so horrifically horrid today compared to yesterday. I mean, the place I live in, except for when people are sleeping, there’s a jam. But there are BIG JAMS and there are small jams.

So, this morning was a BIG HAM…I mean, Jam.

Turns out, as I approach the ‘cause of jam’, the traffic light turns green on our round for like five seconds or something…and then yellow, then red for an HOUR before it turns green again!

But that’s not what made me mad. What drove me nuts was that, there’s this little bridge that we have to go through…and right there, right smack in the middle of the bridge, of was a man with his hands on his hips. He was rock solid, alright. He had on RayBans (from Chow Kit) and a I-mean-business demeanor.

He was a polis (police officer).

I had to yank my mouth close when I saw him standing there, watching us poor folks caught in an unwarranted and VERY UNNECESSARY ham…I meant, jam, again, while he admired the scenery, watching out for monkeys in trees!

If not for the kids sitting on the backseat playing their Nintendos, all sorts of expletives in all types, forms and manner of the languages I speak, would have come out of my mouth.

I was just thinking…. ‘Did he or did he not see that there was something wrong with the traffic lights? Is he or is he not enjoying himself while watching us suffer? Would he or would be not shoot me if I walked up to him and grabbed his balls and yanked it with all my might?’

I was just thinking, of course, because just then, I had to make a mad dash for that five-second green light making sure I hit the opposite side of the road before it turns red.

I hit the other side of the road but I was so mad that MY FACE was red. 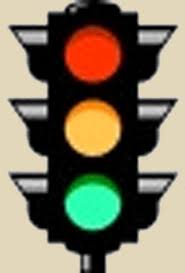 Jamie said…
Sometimes its better not to have the fooking BolehLand's police force directing traffic...they are nothing but a bunch of SOHAIS...just good for eating ( money ), shitting, sleeping and making babies..

Try to look for them at the first sign of rain and I will bet you my cherry white arse that none will be around....freaking bunch of useless hvucks!!
October 11, 2008 at 1:47 AM