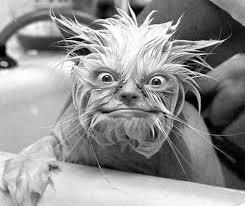 Are creative people a little freakish and unique? I've heard some people lament about creative people before - "They're a little weird sometimes because the creativity in them makes them a little bit cuckoo somewhere in their heads".
On a scale of creativeness (of cuckooness), I think I rank myself a 7. I am not considered a creative genius but I consistently have some good (and mostly horrid) ones enter my head. And there's nothing more satisfying than to see one of your creation come to fruition.
(I bet you can see where my LAW DEGREE could fit into this whole equation or strange personality, right. Right)
But do you REALLY think creative people are little funny? Or eccentric? If you ask me, my answer would be a wonderful 'yes' because most of the creative geniuses I know in the music, writing and other advertising or movie-making industry are a little funny in the head. They have out-of-the-norm perception of what's acceptable and are often a little loud-mouthed (identify yourself if you think I am talking about you).
Creative people and writers, musicians or actors are born with that streak in them and it's because they have loads of things that they see and others don't that they get a little impatient with others.
Just imagine...it's like "Why can't you see it, you big fat dumbo? It's right there under your nose. We could do this and that...and then this...then that and it would ALL COME TOGETHER so BEAUTIFULLY".
Normal people will stare at them with mouth open.....really? Would it? Aaaahhh....if you say so. But inside their heads, they're probably thinking, "This person's really got his or her screws all wrong, man"
Creative people may have a slightly more....erm....eccentric and attention-worthy personalities but I would not be too keen to call them weirdos or cuckoo-heads. Instead, I would like to think of creative people as a necessity because....without them, the world will be normal and there would be no entertainment and drama.
B.O.R.I.N.G.......

Anonymous said…
i've 2 fessup to this one. lots of my friends call me a little freakish but i everyone's entitled to be themselves. so be it. i can't care too much about what others think about me, can i? that would drive me bongcus. so, be it.
September 21, 2008 at 12:32 AM