I don't usually comment on what's happening in other parts of the world because I don't have all the facts. But sometimes, when something happens and you have enough conviction to feel it warrants a word or two, I think we should say something about it.

Silence is powerful. Where you lend that silence, it grows. And I cannot agree with the use of force, abuse, violence, and power to silence people who stand up for something. 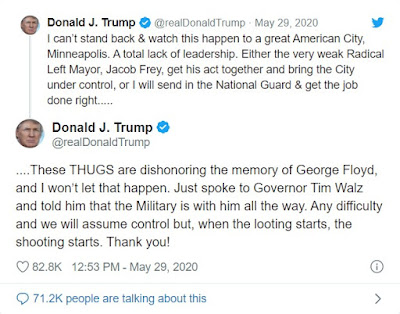 Donald Trump is not my President so, I don't care. In fact, I don't even like my own Prime Minister at the moment. A lot of us have kind of given up trying to figure out what is going on in our country because we can't keep up with it all, partly due to the onslaught of Covid-19.

But who on earth compliments himself as much as this man? LOL! He refers to himself in third-person twice, not including his own Twitter handle. OMG...


I know Putin's said some really awful stuff but Trump's recent tweets remind me of the time I read something by Philippines' Duterte.


"We were affected by the traffic. It took us five hours. I asked why, they said it was closed. I asked who is coming. They answered, the Pope. I wanted to call him: 'Pope, son of a whore, go home. Do not visit us again'."

And like Trump, his words about women were also rather unbecoming of a leader. This was what he said about a rape victim, saying that it was how men talk. Not unlike what was said by U.S.A. President.


"I saw her face and I thought, 'What a pity... they raped her, they all lined up. I was mad she was raped but she was so beautiful. I thought, the mayor should have been first."

He went on a back-and-forth with an apology and a retraction. Who knows what this guy is thinking? All I know is that I would unfriend anyone who talked like that about women and rape victims.

The lockdown is almost over here in Malaysia (I think, albeit, the last I heard but don't know how long this news will remain true because...who knows, right?) and I have to admit being a little anxious about going back to the normal. What's the new normal?

As it is, going to the restaurant or mall is mind-bogglingly confusing.

Just this morning, the moment I opened my eyes, I grabbed my phone and searched up 'hair salons near me' and tried calling a few to see if they could help me chop off some of that hobo locks my boys re rocking.

It's going to be a busy and laborious Saturday for this family over here as we try to clear out some stuff from my parents' home. So, we're going food-hunting and then hair salon-hunting first. 😂😂😂