August 12, 2019
I've never seen a show with Ji Chang Wook in it. All I remember of him was his appearance on Running Man where he was cute, adorably innocent, and kind of a scardy cat when it comes to roller coaster rides. #lol

I accidentally watched 'Healer' kdrama on Netflix because I was just done with another show and it was...just right there and I remember his name. I don't care much for Park Min Young (the lead actress) because her face is too sculptured fake that she shouldn't even bother denying plastic surgery of the highest level.

I am sure lots of South Korean actors and actresses go through them but her massive facial reconstruction just smells of desperation and a deep dislike for her own born-with face. Don't diss me, it's my personal opinion, awright? She, however, redeemed herself with quality acting. So, cool? Cool.

Anyway, here's my take on 'Healer' the kdrama. 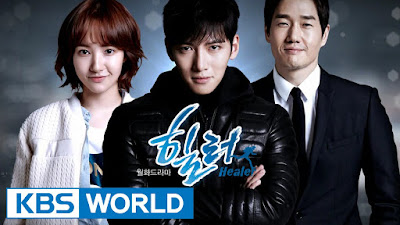 The cool super-hero acting vs. dorky, innocent, bumbling human being

From the first episode onwards, I was taken with how cool this bass-ass hero for hire is. Ji Chang Wook made it look effortless. But after a few episodes in, he shows us another side of the character - the socially awkward, nervous wreck human.

It amazed me how he switched from a superhero mode to a nervous wreck within seconds or even within the same frame. His expression goes from 'I'll save this weakling woman' to 'Oh, there's a bug in my house!!!' within split seconds.

And because of the nature of his character, sometimes he had to refrain from helping out too readily just to keep his cover as a photographer-protege intact.

Reminds you of Superman who has to keep his cover as a newspaper reporter? Yup. It does. But I think Ji Chang Wook wins in this department because he does both very, very, VERY well.

Like I said, I don't like Park Min Young, say what you want. But in this kdrama, she excelled! She has crushes on strange famous people. She breaks out into a random, dorky dance moves and sings out-of-tune whenever she's nervous. Adamant about something when she shouldn't be. She possesses out-of-place optimism and courage in the most senseless way possible. And have a deep love for her adoptive fathers like no one else despite her dreary childhood as an abandoned little girl picked up from the playground by a Good Samaritan.

Although, based on the premise of the show, with a Superhero in the midst, she should have been relegated to nothing but a damsel in distress but she's often like hell I'm sitting this out. I'm going in, cover me...or not. Whatever.

Her recklessness is sometimes the source of frustration for our Superhero in question because of what he knows lies ahead of the situation.

Props also need to be given to the writer for skillfully writing in such a way that does not take us for a ride and treating us like couch potato airheads.

She knows we're thinking and processing while sitting idly in front of our TV/laptop/smartphone/tablet, watching with an eagle-eye. But I give her credit for not spelling everything out for us even when she should/could have.

It adds to the mystery and also help us make our own conclusion.

She also took her time revealing the identity of the Superhero Healer and even when our lead lady has it sorta figured out, she refrained from spelling the words out. In fact, many of the usual lines in dramas were removed and if they were cheesy as hell, the characters would say so themselves, echoing our thoughts.

The drama was also well-paced, placing and following through with cliffhangers that delivered.

I can't say enough about the quality acting delivered by Kim Mi Kyung. All the while, I was thinking to myself - her workspace for the months of filming was in a dark room, alone, in front of a computer, punching away at the keyboard, singing ridiculous songs and performing horrifyingly embarrassing dances, and reacting to things she can't see in front of her.

She's Superhero Healer's eyes and ears, never having met each other in person, she's the pro hacker who is beyond her prime but is the best in business.

I find it refreshing that the tech wizard in this kdrama is an old, lonely woman who just goes by the name of 'Ahjumma'.

My only complaint was that not much time was spent on fleshing out her story except towards the end. She and her Healer Superhero communicate basically through an earpiece, phone, and computer. That was it.

Things started getting personal when our Superhero started displaying a personal side that she's never seen before, when he started giving a shit about other normal human beings. That's when she started worrying about him when he was angry beyond reason, ready to kill, break the code of his business, and ruin his life/career. THEN she becomes the mother figure she wasn't before.

She's a veteran actress that I've seen and recognized from various other kdramas but this could be the most memorable character she's played for me.

How did I even miss Yoo Ji Tae after so many years of watching kdramas? How?! #lol

Not only are his eyes and smile drool-worthy (a challenge to our lead actor - I kept wondering if they turned out to be on different sides of the fence, who would I mourn more for), he is mesmerizing to watch!

A 6-footer with slim, lanky and sturdy built, he has an air about him. He is cocksure most of the time, knows he commands attention, is empathetic, confident, and knows his stuff. Basically everything a woman can ever ask for.

His role isn't as challenging as the one Ji Chang Wook has but he held his ground and displayed exceptional acting skills. But according to his Wikipage, he's in-deep when it comes to producing shorts, indie films, and creative (and perhaps risky, unbankable) projects. He's also a compassionate ambassador for a wide range of humanitarian organizations.

There's something about the way he does not overreact, is level-headed, uses his brain to come up with more feasible (compared to the possibly violent alternatives our Superhero Healer ones) plans to tackle problems. The way he slow-blinks in understanding, offer a small, understanding smile, and patiently sit in a corner to wait out a tantrum that is captivating.

As our Superhero Healer rants and trashes around in anger and fury, he simply half-whispers, 'And? Is that what you want?'. He prods gently, 'What happens then?'

This is a keeper just like some shows I remember liking and will continue to watch during my 'relax hours'. Just because there's so much eye-candy, cool parkour moves, bad-ass rooftop running, touching, reveal moments.

My only complaint is that it can be a bit unbelievable in the beginning and you might start questioning why would someone run on the rooftop while chasing after a car on the road. You might also question the possibility of jumping from one building to another when they look very OBVIOUSLY an impossible feat.

But then, that was just the skeptic in me and you might find yourself asking the same thing.

And by the way, if you like intense, puppy-dog eyes on men, this one is going to do you in.

BONUS: Am so absolutely in love with this soundtrack by, surprisingly, a band I used to listen to when I was young: Michael Learns to Rock