Anyway, this shashouka recipe's been sitting on my desk for some time and I just didn't think anything of it despite the video looking absolutely epicurean. I took it from Food Wishes which also has a Youtube Channel.

I have to admit that I sometimes I watch Food Wishes videos to sleep because 'Chef John' is hilarious and snarky. And I like his chilled out vibe, his laid-back attitude of 'If you want salty, put more salt. I'm not there to stop you' and his don't-overthink-this-shit mentality to cooking. 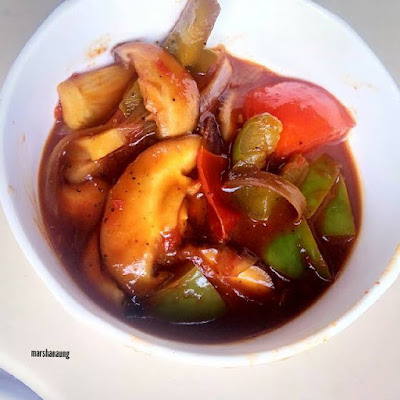 So, I bought a packet of fresh mushrooms from the store without knowing what to do with them (yet) when I was there a few days ago (we keep doing this, don't we? LOL) so, when I saw the recipe again, ah well, time to get off my laurels.... XD

I skipped the eggs not because I don't like eggs, but because I have leftover roast chicken. Throwing things away is also NOT my thing. It's edible for a couple of days if kept in the fridge properly, folks.

So, went ahead and modified this Shakshouka recipe.


Shakshouka is a dish of eggs poached in a sauce of tomatoes, chili peppers, and onions, often spiced with cumin. Its present egg and vegetable-based form originated in North Africa. It is popular in the Middle East and North Africa

We ALLLLLLLL know the wonders and panacea of benefits of consuming turmeric because it's like the IN-thing right now. How can you miss it? It's like right up there with avocado.

Cumin, in fact, has many health benefits too and is just as adaptable.


You can watch the video for the recipe or print out the simplified version of the Shakshouka recipe here. Whatever it is, just go with your own taste buds. They know best.

And oh, BTW, I used a stove AND slow cooker because...well, you know...life has to happen on the other side of the kitchen as well.

p.s. For some reason, my kids had raving reviews about this dish even when I didn't think too much about it at first.

I wanted something light for lunch and had some mushroom. There was also this Shashouka recipe staring at me so, I fried the mushrooms, added some simple spices and threw it into the slow cooker for less than 2 hours. Give it a shot too! I did not have a can of crushed tomatoes; instead, I had leftover tomato paste and some fresh tomatoes so, I modified using both instead and I preferred it to be a little sweeter (sweet tooth be damned!) so, added some honey/syrup. Traditionally, it has eggs in it. We served with leftover roast chicken.