December 23, 2016
It's the rainy season over here so, it's just days of smelly laundry, staying indoors and running around the park in absolute joy during the evening when there is no rain. I know we have it so much better than so many other people in other countries, some with blistering heat, others with mind-numbing cold and I do thank my lucky stars that we live here.

Anyway, it is also the holiday season right now and everyone's either away for a holiday in another country or planning parties and dinners with their family and friends. We have been doing the same, the gatherings, not the holiday (I wish - lol). The good thing about that is that my boys got to see their cousins a bit more than usual.

The sad thing is that my in-laws moved away from the neighborhood a couple of years ago. With them being so near then meant that I could always drop the boys off any time I need to or every Friday. The Friday gathering became a ritual for us. It was a safe day to plan an outing for us parents, and the kids knew they were going to see their noisy cousins then.

Things have changed since then but as with anything in life, everything changes. With them moving so far away now meant less time spent together. With technology, they continue to remain close-knit but it isn't the same as gathering around in a small room with a double-decker, arms and legs all over each other, teasing, laughing and playing games together on their Nintendo DS. Every Friday.

These bunch of cousins are close because they grew up together and being the same age, they share pretty much the same interests. When they were young, it was Barney. Then it progressed to Ultraman, then Power Rangers (even My Little Pony, but pretend I did not write that hahaha), then Nintendo and then Youtube. I hope they remain close despite the fact that everyone is starting to sprout their own pair of wings and trying to fly in different directions.

Thanks to technology, they may, hopefully, stay close to each other and continue calling each other names. ;-P

Things change all the time, like clouds.
Never the same,
Marsha 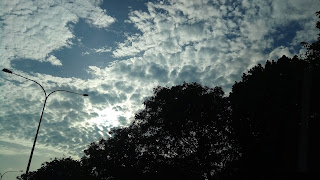