October 13, 2010
I don't know how this came about, really. It was completely by accident but it was probably based on something my mom, my grandmother or someone else cooked before. This is the result of the agak-agak method of cooking. Absolutely no aim but based on your instincts. Sometimes it sucks and sometimes, it rocks. 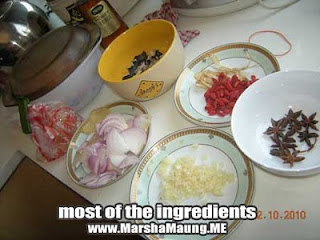 Most of the ingredients are here already. The wolfberries, star anise, garlic, onion, dried black fungus, rock sugar and that long, long, thin white chinese herb that I don't know the name to. And oh, don't forget the pork. Just choose a part of the pig that is meaty, fatty and also comes with a bit of bone which will flavor the gravy. 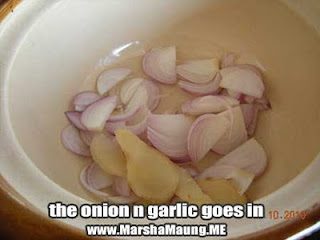 I chose to use claypot...well, because I love my claypot and it is just the right size. Silly reason but I heard that it seals in the flavor so much better than when an ordinary metal pan is used.
So, in goes the garlic and the ginger. Cook it until the onion is soft and the ginger is fragrant. 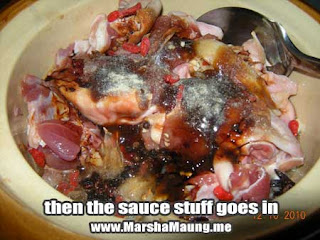 Once the onion and ginger is cooking, pour the pork and everything else in together with a good portion of water. The sauce ingredients I used were oyster sauce, soy sauce, salt, water, dark soy sauce, pepper, a little bit of sesame seed oil.
When the concoction is boiling, add in the rock sugar. 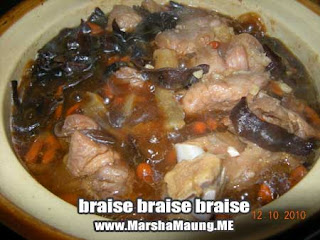 Only towards the end of the cooking process, pour a portion of balsamic vinegar. The longer you cook the vinegar, the less acidic or sour it is. So, cook and pour as you like. I like it sourish but the kids don't, so, kids win. I cook a little longer so that there is still a lingering smell of the vinegar there without the tanginess.

In the end, mix a teaspoon (depending how thick you want it to be) of cornflour with water, pour it in and then stir for a while.

There you have it - my accidental vinegar pork. I used the leg part of the pig, BTW. Very juicy!