My Baby Wanna Be Cool Too

March 17, 2009
It's just so cute that I can't resist not posting it up...lest I forgot such innocent statements when they're older.
As all boys are, my kids are into all those cool alien things and Pokemon as well. It's hard for a mommy to keep up with her boys. It's different when you're a mother to daughters and you can get whatever's on your daughter's mind. But when your kids think booger-diggin in utterly so cool, fast cars, invading aliens, fallen buildings, crashing motorbes....sigh....I just find it so hard to get. 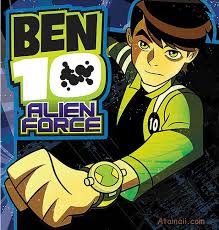 One of the things they're really into these days is Ben 10 Alien Force. Ben 10 started off with a young boy who discovered this watch that stuck to him and allowed him to change into 10 different aliens to conquer the evil world. I have to admit it's kinda cool.
But as Ben 10's audience grew, Ben 10 has to grow too, hence, there's Ben 10 alien force whereby Ben is now older, much wiser and have a team of people with him to fight evil alien forces.
Anyway, my kids are really into it and I made it a point to listen to the theme song and find out how to play the song on the piano. I have to say that it's a hit with them!!! They're like, "COOL, mom! Teach me how to play Ben 10 song, MOMMMM!!!!"
Tell me about it....I must be one of the coolest moms in the world for learning how to play the song just to get her kids interested, eh? Well, it's a cool song, so.... :-) And I've always had this penchant for looking up chords and tunes to songs that I like, so....
However, I gave my kids boxes and paper plates for them to create things with them....it's school holidays, and my elder son came up with a monster to combat Ben 10 and it was kinda cool, I have to admit. Younger son thinks it's cool too and took his box to draw on it.
Right before we slept, Younger son looked completely forlorn and I asked him what was going on. "Mom, it's no fun. Elder son always comes up with cool things and my things always look so cute. It's no fun"!
I burst out laughing when I saw what he drew on his box and plate. This is what he drew on the paper bag I gave him. 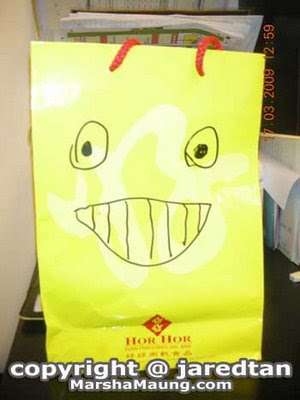