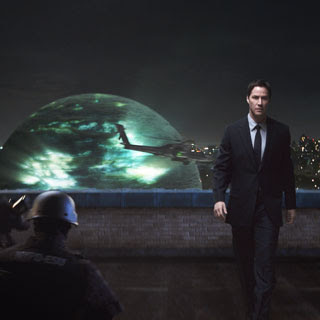 Went and watched ‘The day the earth stood still’ today. Now, before I say anything else, let it be known that I did not know that this was a remake. Therefore, I did not know the extent of success the 1950’s film was and who starred in it. Hence, I watched it with an open heart….because Keanu Reeves was in it (hee hee hee), Jennifer Connelly was in it and that the idea of earth standing still was…woo hoo! I wasn’t expecting anything…period. This was, perhaps, why I thought the movie was OK-ish and not too bad-ish. In all honesty, nothing beats Keanu Reeves in a suit! Well, maybe Keanu Reeves with nothing on (which is what they had in this film) which gave us a good glimpse of those….ahem.

Anyway, the first comment I had about this film was, “This role is made for Keanu Reeves…he’s really good at it because he’s required to be expressionless.” Oh, I love Keanu…I love Keanu to the core and in all sincerity, I think his acting is under-rated. Really, there were movies that required a lot of expressions and he did it…and did it rather well.

But Jennifer Connelly…hmmm….my complaint is not about her or her acting. More like, it’s a complaint addressed towards the writers and the director of the film. She looked ‘duh’ for a scientists and most of the time, the camera is trained on her big, soulful blue eyes. That’s it. It seems as though these two leads are not required to have expressions at all…or have only one expression. Connelly to have one of surprise or shock and Reeves to have none. And one more comment….gosh, whatever happened to the gorgeous Jennifer Connelly? She’s scrawny, looked washed-out and tired. Haggard and old is what she looked like throughout the film. Sunken cheeks, deep lines around the eyes, chopstick legs…sigh. I would have to say Will Smith’s son, curly-haired Jaden Smith, had a little bit more acting to do than the rest and he did it well….and how old is that guy? The film mostly is a little bit more emotional than sci-fi, I would say. It’s not about romance but about….we, human beings, not having been treating earth right. For those who are wondering what this show is all about, the message is this....there’s (a) superior race(s)/force(s) watching us as we live our lives on earth. The earth is not ours and never will be. We're more like lab rats...we're living in a laboratory. One fine day, the human race will become extinct, just like the dinosaurs. But until that day comes, we must learn how to live on earth without destroying it. I love this one line that Keanu delivered. Jennifer Connelly was begging him to spare the human race and give us one more chance, “We can change, please. We can change…” And then Keanu says, “If the earth dies, you die. But if you die, the earth lives.” I was like…WWWHHHHHHOOOOAAAAA. How cool is THAT! As reluctant as I am to admit that, it’s true. If the human race dies, I am sure Mother Earth would survive. Anyway, where was I? A-hah. The ending. A little bit towards the ending, it was OK. So, the human race was on its way to being destroyed and finally Keanu changes his mind and says that perhaps we deserve another chance. Here comes my complaint. And he goes….just like that. Poof! Erm….harlow? Is anybody there? No emotion? That was a little too abrupt for me. But never mind. It’s OK…I still love Keanu…especially when he looks like this. No six-pack there but hey, who’s complaining? How bad was it? Well....to me, it isn't as bad as others say it is and it's not as good as I've hoped for it to be either. All I know is, watch it if you're not expecting anything KABABOOM WHAM BANG SLAM KARATE-CHOP. Watch it with an open heart and mind and just enjoy the message behind the story. This film is definitely not for those who have watched the earlier version. If you're fifty and above, give this film a pass.